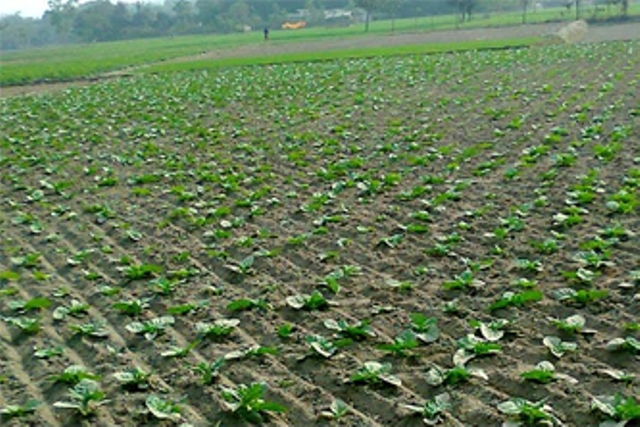 The farmers have started showing less interest in cultivating tobacco in Rangpur agriculture region as awareness
growing about negative impacts of tobacco products on public health and environment.

Officials of the Department of Agriculture Extension (DAE) said
cultivation of tobacco is decreasing despite lucrative incentives being
provided by tobacco companies.

“The number of farmers involved with tobacco farming decreased in last
five years though many of them are cultivating the same on their lands now,”
Horticulture Specialist of the DAE at its regional office Khondker Md
Mesbahul Islam said.

The DAE and other agriculture and environment related departments,
organisations and institutions are discouraging tobacco cultivation to save
soil fertility, public health and environment from hazards and pollution.

The farmers have brought 13,742 hectares of land under tobacco
cultivation during this 2018-2019 seasons in five districts of Rangpur
agriculture region where they cultivated the crop on 13,058 hectares of land
during the 2017-2018 seasons.

“Cultivation of tobacco continued showing downward trend on an average in
the last five consecutive seasons in the region,” Islam said.

Farmers Yasin Ali, Dulal Hossain, Abdul Khaleque and Azizul Islam of
Kathihara village in Sadar upazila of Rangpur said they have cultivated
tobacco on one acre to three acres of land this season like in the previous
seasons.

They said they had been cultivating tobacco during the past one decade
to earn more profits after getting incentives, necessary inputs, cost-free
seedling and fertilisers from tobacco companies with an assurance of
lucrative prices.

Farmers Abdul Haque and Lutfar Rahman of different villages in Rangpur
said they earned better profits last season when tobacco companies purchased
tobacco at rates between Taka 100 and 105 per kilogram.

Farmer Echhahaq Ali of village Kathihara in Rangpur said he left tobacco
cultivation two years back and switched over to cultivation of winter crops
and Boro rice for saving soil health and environment though farming of
tobacco is highly profitable.

Project Coordinator of Association for Community Development (ACD)
Ehsanul Amin Emon blamed tobacco companies for providing incentives to the
farmers to encourage them in farming tobacco posing a threat to public
health, environment and ecology.

He suggested the farmers to begin cultivation of more profitable and substitute crops to tobacco in relay methods as tobacco farming poses a real threat to cereal crop output affecting food security, human and soil health and environment.