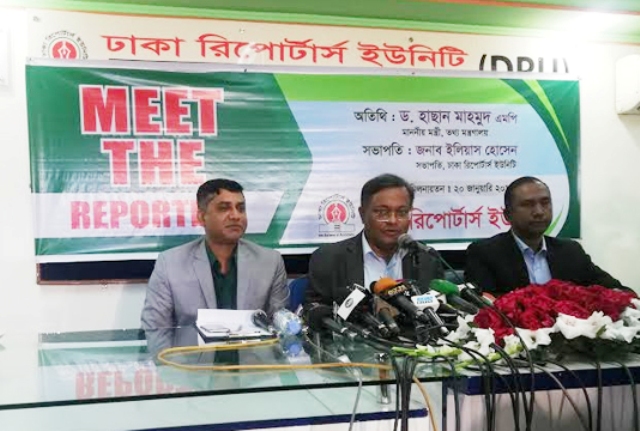 Information Minister Dr Hasan Mahmud today outlined the priorities of his ministry in the new government saying the overall welfare of journalists and ensuring media independence would be the key objectives of his office.

He said ruling Awami League’s election manifesto pledged to arrange accommodation facilities for the journalists and “we will do it (as well)”.

The minister said works were underway to implement the 9th Wage Board for newspapers and news agencies but some more steps would require to be exhausted for declaring the wage hike of the journalists and newspaper employees.

Hasan said a cabinet committee was earlier formed as part of the process to implement the Wage Board recommendations but with the installation of the new government that committee was now required to be reconstituted with Prime Minister Sheikh Hasina’s directives.

“The new cabinet committee would discuss the matter then we will talk to your journalist community leaders possibly on January 23 and thereafter talks will be held with other stakeholders,” he said.

Hasan, however, added: “The process has progressed a lot . . . but we have to exhaust some more steps.”

The minister also said the wage board award should accommodate as well the electronic media with the emergence of a number of private TV channels in the recent years while previously only the state-run BTV was there.

Hasan, also the publicity and publication secretary of Awami League, said the reporters are the heart of the media.

“A single report or a video clip can open the third eye of society. So, publishing a good report with correct information is very crucial,” he added.

Hasan said information ministry was a very sensitive portfolio which Prime Minister Sheikh Hasina entrusting him with its charge and so “I want to work with utmost sincerity along with you”.

“I need your overall cooperation and seek your support to discharge my duties,” he said, adding that Prime Minister Sheikh Hasina’s government, however, was always friendly to journalists.

Hasan said everyone has the right to criticize the works of the government but “we expect the criticism to be constructive so that the state doesn’t suffer . . . we should become more conscious while pursuing journalism”.

The minister said his ministry would work for Media Employees (Condition of Services) Act and assured the journalists of looking into their concerns regarding the ‘Digital Security Act’.

He said a huge revolution took place in the country’s media as well as in social media and the “social media is doing well”.

The minister said there are a number of online news portals in the country which needed proper guidance to flourish and “the government is working to make a policy for this sector”.