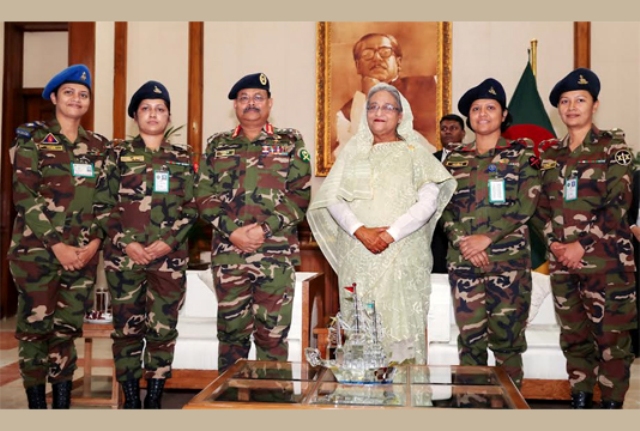 Prime Minister Sheikh Hasina congratulated the newly promoted first-ever four female lieutenant colonels of Bangladesh Army when they paid a courtesy call on her at Ganabhaban on Sunday. Chief of Army Staff General Aziz Ahmed was present on the occasion, an ISPR release said today.

The premier highly lauded the achievements of the female army officers and
wished their further success.

On Thursday, the chief of army staff adorned with rank badges of
lieutenant colonel to the four officers of long course at the army
headquarters.

Sharing their feelings, the female officers expressed their heartfelt
gratitude to the prime minister.

As part of Prime Minister Sheikh Hasina’s commitment to ensure women
empowerment, female officers are being appointed regularly in long courses of
Bangladesh Army since 2000.

In 2000, the four officers joined Bangladesh Military Academy (BMA) as
cadets. After receiving two years of rigorous training, they were
commissioned in the army in December, 2002. They have reached the today’s
successful position after facing different challenges in their 16-year-long
career.

After joining office, female army officers along with their male colleagues have been discharging their challenging duties successfully. Now, Bangladesh Army has female paratroopers and pilots.