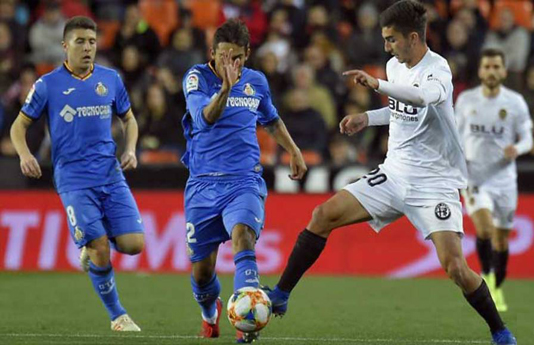 Rodrigo scored a hat-trick as Valencia staged a stunning late fightback at the Mestalla to stun ten-man Getafe 3-2 on aggregate to reach the Copa del Rey semi-finals on Tuesday.

Valencia went into the game looking to fight back after a 1-0 first-leg defeat and keep alive their hopes of winning a first major title since lifting the Copa del Rey 11 years ago.

And Rodrigo’s treble, including two injury-time strikes, sent Marcelino’s men into a semi-final clash with either Real Madrid and Girona after a thrilling 3-1 second-leg victory.

“We believed until the end, because of the support of the fans and because we were superior on the pitch, which is where football matters.”

The home side’s hopes were dashed inside the very first minute as Jorge Molina, who scored the only goal of the first game last week, put the visitors ahead.

Needing to win by two clear goals to progress, Valencia gave themselves hope of a comeback as Rodrigo levelled just after the hour mark, before Getafe centre-back Djene Dakonam was dismissed for a second yellow card with 16 minutes still to play.

Spain striker Rodrigo was on a one-man mission to pull Valencia through, netting again in the 92nd and 93rd minutes to stun Getafe.

The match dragged into a ninth minute of added time, but Valencia held on to close out a barely believable win.

“It’s a great night for Valencia,” said Marcelino, whose side have recovered from a poor start to the season and now sit seventh in La Liga. “We pinned the opposition back in the first half and continued it in the second.”