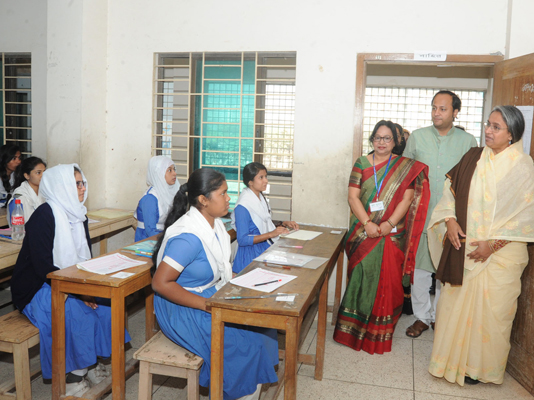 On the first day, a total of 24 examinees in five education boards- – one in Dhaka, three in Barishal, one in Dinajpur, six in Madrasah and 13 in technical – – have been expelled for adopting unfair means. None was expelled in rest of five boards.

Talaking to newsmen, she said the government will take stern action against any evil attempt to leak question papers and forgery in the SSC examinations.

Some 17,00,102 students are participating in the examination under eight general education boards while 3,10,172 are in Dakhil exams and 1,25,059 students in SSC (vocational) examination.

A total of 434 students from eight overseas centres are appearing in the SSC examinations this year.

An extra 20 minutes time are being given for students with disabilities in the SSC and the equivalent examinations while examinees with autism are getting additional 30 minutes.

The authorities asked examinees to enter the examination halls 30 minutes before the scheduled time of examination.

“Stern actions will be taken against those found involved in any irregularities including leaking question papers during the SSC examinations,” the education minister told reporters.

Earlier, she said no question papers were leaked during the public examinations last year.

All departments concerned have been working sincerely to root out all possible sources of question paper leakage, she said.

The government has decided to shut down all coaching centres during the SSC and equivalent examinations.

Our Chattogram Bureau Office reports: The first day of the SSC and equivalent examinations in five districts under Chattogram Education Board (CEB) was held peacefully today.

There was no expulsion of candidates from any centre in the first day in Chattogram but 477 students were absent from the Bangla first paper examination today, control room sources said.

Some 70 vigilance teams including 10 special teams by the CEB authorities are monitoring the situation in and outside the exam centres to check any sorts of copying during the examination.

Controller of CEB Mohammad Mahbub Hasan said the examination was held in a peaceful and fair manner.