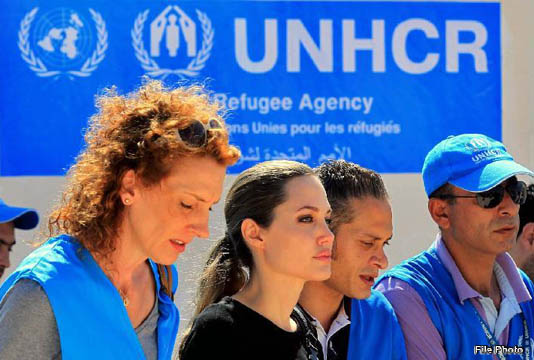 Hollywood megastar Angelina Jolie arrived here this morning as the special envoy of UNHCR to assess the humanitarian needs of the Rohingya people and some of the more critical challenges facing Bangladesh as a host country.

“The heartthrob actress arrived in Cox’s Bazaar to visit Rohingya camps
there including Kutupalong that hosted majority of Rohongyas, more than
620,000 people the largest refugee settlement anywhere in the world today,”
UNHCR sources said here.

The UNHCR office here declared that Jolie is undertaking a three-day
mission in Cox’s Bazar, Bangladesh that has been heavily affected by the
influx of more than 730,000 Rohingyas displaced from Myanmar since August
2017 and now hosts nearly a million Myanmar nationals.

The special envoy will conclude her visit in Dhaka after official meetings
with Prime Minister Sheikh Hasina and the Foreign Minister, AK Abdul Momen as
well as other senior officials, UNHCR said.

During the meetings, Jolie will discuss how UNHCR can best support the
current response led by the Bangladeshi government, along with the need for
safe and sustainable solutions to the plight of one of the world’s most
persecuted minorities, it added.

“Her visit comes just before the launch of a new appeal for the
humanitarian situation in Bangladesh – the 2019 Joint Response Plan- which
seeks to raise some $920 million to continue meeting the basic needs of
Rohingyas and the communities so generously hosting them,” the source said.

This is the Jolie’s first visit to Bangladesh. She also met with displaced Rohingya people during a visit to Myanmar in July 2015 and in India in 2006.