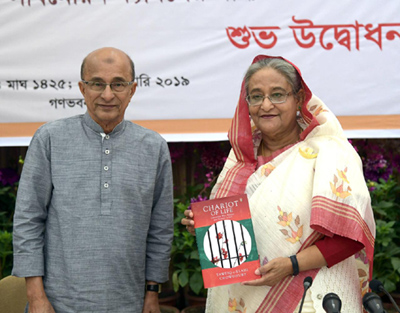 The Prime Minister unwrapped the cover of the book at her official residence Ganabhaban in the city this morning.

The ‘Chariot of Life’ is an autobiographical account of two lives lived by the author, thirty seven years ago.

Commenting on the book, an author, winner of National Independence Day Award and former Finance Minister MA Muhith said, “Chariot of Life has an interesting way of stitching together accounts of our Liberation War with events that happened much later… it is beautifully written… a very good piece of literature… last part is written like poetry… it is a poetry”.

Starting as a Lecturer of Dhaka University, he, later, joined Civil Service of Pakistan (CSP) and ditched his job to join the Liberation War of Bangladesh in 1971.

Tawfiq-e-Elahi was commissioned in the Bangladesh Defense Forces, served as sub-sector commander in Sector-8 and was decorated as Bir Bikram for gallantry.

He was one of the main organizers of the Proclamation of Independence and swearing-in ceremony of the government of Bangladesh in Mujibnagar on April 17, 1971.

After serving as secretary, he retired in 2002 and was made Advisor to the Prime Minister in 2009. He is still serving in the capacity.

Chariot of Life is his first independent book. Penguin Random House India is the global publisher of the book.