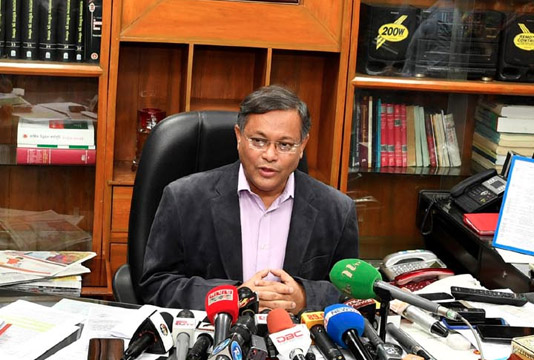 Referring to a call of BNP leader Rizvi Ahmed, the minister said he (Rizvi) made a call to prime minister, through a press conference, to release BNP Chairperson Begum Khaleda Zia from jail. “But the prime minister has no jurisdiction to release any prisoner from jail,” he added.

He said “Actually, Rizvi Ahmed is showing disrespecting the court by seeking the release of Begum Zia to the prime minister.”

Hasan, also the publicity and publication secretary of Awami League, said BNP would need to move ahead through the law and the court, if they want to free Bezum Zia from jail. There is also another way to release her, he said, adding if she wants apology to the President by confessing her guilt, she might be freed.

About the BNP’s ally Jamaat, the minister said they might have taken a tactic as their relation is very deep.

“I saw a report that BNP and Jamaat are separating. But the real news is that Jamaat is leaving BNP. BNP doesn’t want to leave Jamaat,” Hasan said.

He said, “We will welcome BNP if they could leave Jamaat by admitting their fault as it was their mistake to form alliance with Jamaat, the anti-liberation force. If they seek apology to the nation, we will welcome them.”

“Neither BNP nor Jamaat will leave each other as both the political parties have almost similar thoughts and spirits. They might split as part of a tactic,” he said.

He said everyone knows that both BNP and Jamaat are communal parties and they are very much closer to each other in terms of thoughts, ideals and spirits.