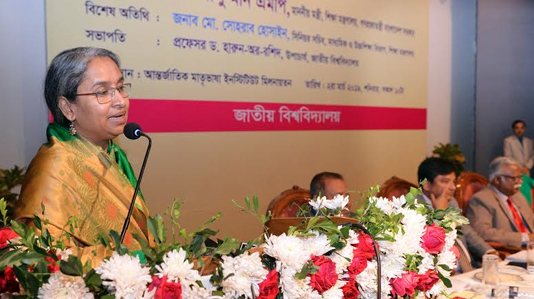 Education minister Dr. Dipu Moni today said the National University turned around overcoming all the adversities and negative images it had.

“The National University has had a sturdy evolution…The performance ranking system will expedite the enthusiasm of the competition between the colleges in a positive way, ensuring the quality of education,” said Dipu Moni while addressing as the chief guest the ‘College Performance Ranking 2016 and 2017’ programme, held at International Mother Language Institute Auditorium in the capital.

She mentioned that Prime Minister Sheikh Hasina has prioritized the education before everything to establish the ideal country as per Bangabandhu’s dream and hoped that the progress of the university will keep flourishing with the passage of time.

Dhaka Commerce College won the award of best non government college, while Lalmatia Mohila College was awarded as the best women’s college at the national rank of 2017. The 89 best colleges among the 857 were awarded with money, certificates and crests.