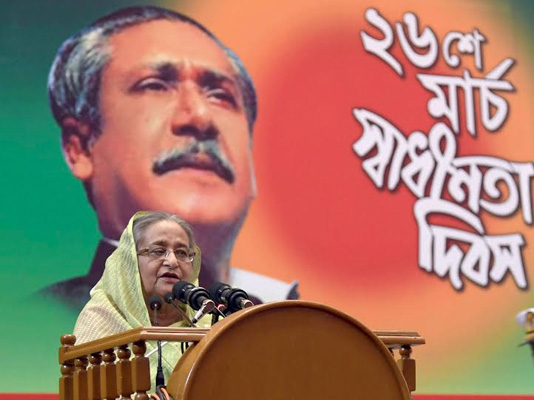 Prime Minister Sheikh Hasina today said the Awami League has survived several attempts to destroy the party due to its deep-rooted relations with the people.

“AL has survived attempts to destroy the party made by Yahya Khan, Ayub Khan, Ziaur Rahman, Ershad and Khaleda Zia as its relationship with the people was deep-rooted,” she said while presiding over a discussion meeting marking the 49th Independence Day and National Day.

Awami League, which was formed by Father of the Nation Bangabandhu Sheikh Mujibur Rahman, has struggled for independence and economic emancipation of the country alongside establishing democracy, the premier said. “It is a real political party and it could never be destroyed.”

The country is now a role model of development due to huge development works carried out by the Awami League government in the last 10 years, she said, adding that “we have conquered the sky by hitting satellite into space and also the sea with submarine.

She added that the Awami League government has already realized the land boundary agreement and settled sea boundary dispute following the footsteps of Bangabandhu.

But, she said, the party which doesn’t believe in the country’s independence and people’s welfare and which was created out of illegal grabbing of power. “They are like ‘Swarnalata’ (parasite plant) and their existence depends on breathing of another tree,” she said.

They have no existence without power and they never can give democracy, she also said.

“The parties which were in power for long 21 years did nothing for people’s welfare. They rather wanted Bangladesh to remain a land of beggars for seeking foreign assistance,” she said.

Sheikh Hasina called upon Awami League leaders and activists to work in together for making the party stronger and ensuring development of the country being imbued with patriotism and ideals of Father of the Nation Bangabandhu Sheikh Mujibur Rahman.

Outlining huge development works carried out by the AL government, the premier said that Bangladesh is graduating to a middle income country.

She said her government is working to free the country from hunger and poverty as dreamt by Father of the Nation Bangabandhu Sheikh Mujibur Rahman when the nation is set to celebrate Bangabandhu’s birth centennial in 2020 and the golden jubilee of the Independence in 2021.

Sheikh Hasina, eldest daughter of Father of the Nation, recalled the contribution of Bangabandhu to the Language Movement and the Liberation War as well, saying that a vested quarter had tried to erase his (Bangabanbdhu’s) name from the history.

The Father of the Nation had prepared the nation for the armed Liberation War from a non-cooperation movement and he was able to involve all the people into the movement aptly highlighting the discrimination between the then East and West Pakistan, she opined.

Bangabandhu had set a rare example in the world to give a country a constitution within nine months of its independence and sending allied forces back to their native country after Bangladesh achieved independence, she mentioned.

There is no example in the world from where allied force had been sent and it had been possible as both Bangabandhu and Indira Gandhi were freedom-loving leaders, the premier said.

She added that BAKSAL was formed involving all the people of professions and political parties to bring them under a platform to make a national consensus for rebuilding the war-ravaged country.

Bangabandhu on the one hand carried out huge development works including construction of bridges, culverts and roads, and on the other hand brought recognition for Bangladesh from 126 countries and different international organisations, such as OIC, she mentioned.

When the country was advancing under the visionary leadership of Bangabandhu with seven percent GDP growth in 1975, some Bangladeshi people along with their foreign masters assassinated the Father of the Nation alongside most of his family members on August 15 in 1975, she said.

The killers of Bangabandhu had a design to bar once for all Bangabandhu’s blood relations from coming to power, she said. But she (Sheikh Hasina) and her younger sister survived the massacre as they had gone abroad 15 days ahead of the August 15 carnage, she said.

The country’s development got stuck with Bangabandhu’s assassination, she said.