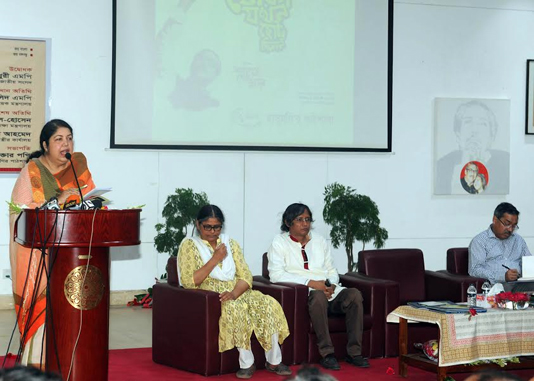 “Leader like Bangabandhu is not born always for a nation. We are really fortunate to have the great leader Bangabandhu amongst us. We have to infuse the humanitarian qualities of Bangabandhu into the new generation,” she told a function at the Nalinikanto Bhattashali Gallery of the National Museum here.

The Speaker also inaugurated an animated film on the book on the occasion.

Shirin said the graphic book and animated film will help portray Bangabandhu before the new generation.

The Speaker underscored the need for keeping the graphic book at the book corner of every educational institution across the country and screening the animated film for the new generation.

She urged the teachers to arrange quiz, debate and essay competitions on the book to encourage the new generation to learn about the greatest Bangalee of all times Bangabandhu Sheikh Mujibur Rahman, the architect of independent Bangladesh.

The Speaker said Bangabandhu was an undisputed leader who struggled against injustice and repression for the emancipation of people until his death.

Life and works of Bangabandhu always make all remember his deep essence of life, political philosophy and profound love for the country and its people, she added.

Speaking on the occasion, KM Khalid said a fundamentalist and communal force is out to distort the true history of the country’s Liberation War under an orchestrated plan.
But their ill attempt will not succeed, as the government’s efforts to portray true history and heritage of the country are continued, he added.

As part of the celebration of the Bangabandhu’s centenary ‘Mujib Barsha’, ‘Amar Pita Sheikh Mujib’ festival will be arranged across the country in phases throughout the year.