Tamim backs Soumya, Liton to support him in the World Cup 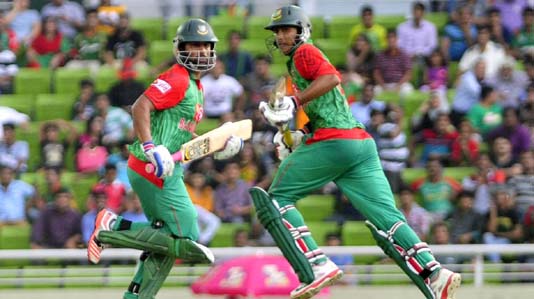 Over the last 10 years, Tamim Iqbal single-handedly has been giving the top order a solidity when the others continued misfiring around him.

So far 13 openers were tested to cement their place as the opening partner of Tamim but all failed before Soumya Sarkar and Liton Das kept them in the race.

Those two however made it in the World Cup squad and Tamim kept faith on their skill to back them to fire around him.

“I am sure that Liton and Soumya got enough chances. I believe this is the high time for them to show how good they are,” Tamim said here today. “They are capable enough to serve Bangladesh for 10-15 years. Hopefully they will come out with all guns blazing.”

Both Soumya and Liton had ordinary Dhaka Premier League (DPL) outing before they rekindled their flame at the fag end of the league. While Liton showed his talent by playing some delightful knocks, Soumya created even bigger milestone by becoming first Bangladeshi batsman to hit a double century in the List A cricket.

Tamim heaped praise on this knock.

“Someone from Bangladesh scored 200 runs for the first time, it’s a great achievement,” he said. “Although we will be playing in a different condition and against a different bowling line up but scoring runs are always positive. It gives confidence. When someone goes through off form he forgets how to score runs. So these two big innings will give him great confidence before going to Ireland.”

Tamim said, even though he was not bothered by an established opening partner around him, the understanding between the two openers is important as far as to set the tune of the match.

“It doesn’t bother me in a particular match but when you have a regular opening partner then you understand each other’s game very well. There are some times when my timing isn’t right, maybe I am hitting but the ball is finding the fielders then he needs to take the extra chance. And the same thing goes for me as well. But somebody is not settled it’s very difficult to tell them to take the chances,” he said.

“In every profession it is important– if you work with your colleague for about 20 years then he will know about your likings and disliking. The greatest opening partners in the world Hayden-Gilchirst, Sachin-Ganguly, Sehwag-Sachin they all had great understanding. When you see them playing you think that they are having fun in the middle and they know what the other wants. But it’s our bad luck that we didn’t have that kind of thing yet but I am sure that the two are going to the World Cup they are capable enough.”