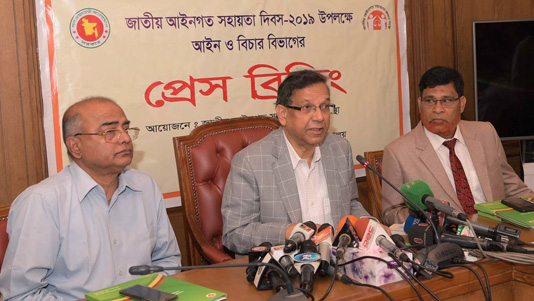 “Along with our Prime Minister, most of the people of our country are angry over the incident and they are keen to see the case finished soon,” he said at a press briefing at his ministry marking National Legal Aid Day on April 28.

“The prosecution (of Nusrat murder case) has taken the ground preparations needed to finish a trial in the due process. As soon as the formal charges will be formed, we would take necessary actions to finish the trial in record time like the Rajon murder trial,” the minister said.

Replying a question on what kind of legal help the ministry can provide to BNP Chairperson Begum Khaleda Zia for her release on parole, Anisul said she does not have any qualification or she does not fall in any category to avail of the benefit.

The minister narrated different activities being carried out by the present government to provide legal aid to people free of cost.

The inaugural function of the day would be held at Hotel Intercontinental in the city at 10am. Legal Aid fair and cultural activities will be held at Dhanmondi Ravindra Sarobar.

BTRC has been requested to send SMS on legal aid to all the mobile subscribers in the country on that day as government info.

After coming to power again in 2009, Prime Minister Sheikh Hasina again took initiatives to expedite the implementation of National Legal Aid Services Act, 2000. Legal aid committees were formed in all 64 districts led by district and session judges. Apart from districts, legal aid committees are working at upazila and union levels. There is also a legal aid committee at the apex court.