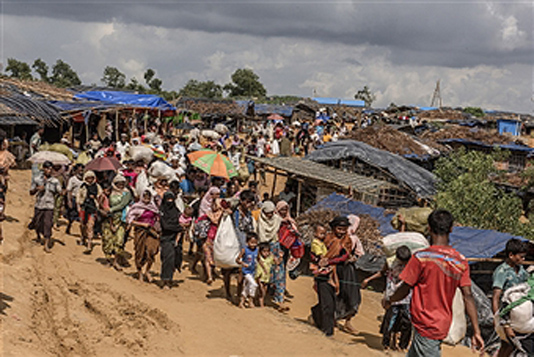 The Visiting three top UN officials today called on the international community to continue supporting the needs of 1.2 million forcefully displaced Rohingya as well as local community in Cox’s Bazar.

They reiterated the UN’s commitment to keep working toward safe and sustainable solutions for Rohingya refugees in Myanmar and noted the UN efforts there to help create conditions conducive to return.

“This remains one of the world’s biggest refugee crises,” said Filippo Grandi. “There are more than 900,000 Rohingya refugees in Bangladesh, most of whom fled Myanmar in 2017. I saw a great deal of progress, but their situation, especially for women and children, remains fragile,” he added.

The visit also came just ahead of the cyclone period, which is followed by the monsoon season. Both pose serious risks, including flooding, landslides and disease outbreaks, to thousands of already vulnerable women, men and children, the release said.

While in the camps, they also assessed the ongoing work that has been undertaken to address weather-related risks, including the strengthening of shelters, the improvement of infrastructure, and the training of volunteers.

“We are concerned for the welfare of the Rohingya refugees who live in such vulnerable circumstances in Cox’s Bazar, as well as for host communities which also face significant challenges, particularly in the lead up to the monsoon season,” said António Vitorino.

The UN leaders also met with families who were going through the joint government and UNHCR biometric registration process, receiving documents that for many are a first and that confirm their identity in Bangladesh, as well as enhance their right to access services and protection.

When they met with the Foreign Minister on Thursday, Momen demanded intensified United Nations pressures on Myanmar, taking along with it the countries having trade ties with Naypyidaw, for safe and dignified return of Rohingyas.

Foreign Minister reminded the UN officials that crisis was created by Myanmar while Bangladesh wants its peaceful resolution and insisted that Naypyidaw must ensure as well conducive environment inside Northern Rakhine for the Rohingyas safe repatriation.

Bangladesh informed the visiting three top UN officials that the government developed Bhasan Char island to accommodate 1,00,000 Rohingyas while their total figure is a over 10 lakh and the planned relocation was aimed to ease the congestions in their existing camps.