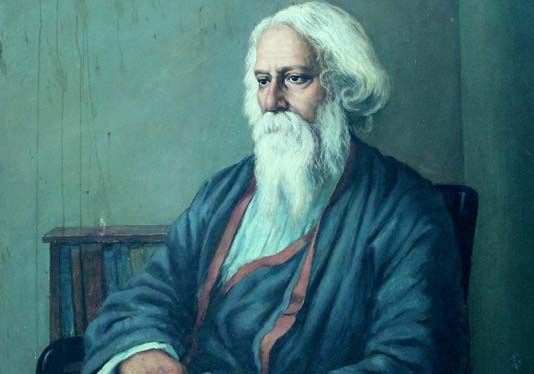 The nation today celebrated the 158th birth anniversary of Biswakabi Rabindranath Tagore, who reshaped Bengali literature and music as well as art of Indian subcontinent with contextual modernism.

On the 25th of Baishakh in 1268 Bengali year, Rabindranath, the fountainhead of Bengali wisdom was born at Jorasanko in Kolkata. His influence has been compared, by many, to Shakespeare in the English-speaking world.

Different government, non-government, social and cultural organisations and educational institutions celebrated the birth anniversary of the great poet through various programmes, including discussions, recitation of poem and cultural functions.

State Minister for Cultural Affairs KM Khalid presided over the function while Chairman of the Parliamentary Standing Committee on Cultural Affairs Begum Simin Hossain Rimi was present as special guest.

Dhaka University chalked out an elaborate programmes including discussions and cultural function. With the theme, “Rabindranath for building humanitarian world” a discussion was held at Teacher-Student Center.

The birth anniversary of the Nobel laureate poet was also celebrated at Shelaidaha in Kushtia, Shahajadpur in Sirajganj and Dakkhindihi and Pithabhog in Khulna through various programmes under the arrangement of district administrations.

Author of Gitanjali, profoundly sensitive, fresh and beautiful verse, Rabindranath became the first non-European to win the Nobel Prize in Literature in 1913.

The legendary poet breathed his last at his paternal residence in Kolkata on Sraban 22 of Bangla year 1348 (August 7, 1941).