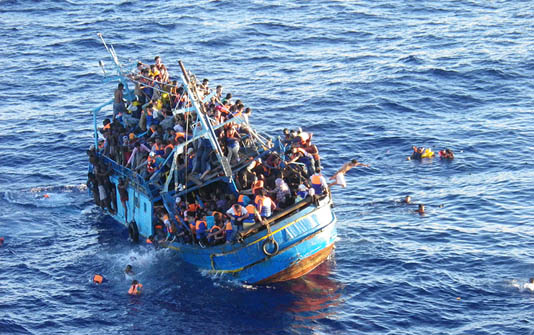 Foreign Minister Dr AK Abdul Momen today feared 30 to 35 Bangladeshi nationals died as a boat capsized in the Mediterranean Sea while they were trying to reach Italy from Libya illegally.

“As per our information, there were 51 Bangladeshi in the boat carrying 75 illegal migrants. So far, 14 Bangladeshis were rescued and the rest are still missing…. so, we can fear at least 30 to 35 of our nationals have died,” he told newsmen at his office today.

Momen said the Bangladesh ambassador in Tripoli has already sent mission officials to Tunisia for looking after the matter. “It’s not possible to say the exact number of the dead right now. What we came to know is that the rescue operation is still going on,” he said.

The foreign minister said Bangladesh embassy in Libya is keeping contact with the Red Crescent in Tunisia. Currently, Momen said, Bangladesh is not sending any workers to war-torn Libya. “These Bangladeshi nationals had probably entered Libya via any of the Middle Eastern countries with the help of human traffickers,” he added.

Noting that these types of tragic incidents have been continuing since long, the minister said, “I don’t know how to stop it.”

Momen laid emphasis on taking coordinated efforts involving all relevant ministries and immigration police so that no Bangladeshi national can cross the country’s border with the intention of illegal migration.

Quoting the Tunisian Red Crescent, AFP reported that around 60 migrants, most of them from Bangladesh, have died after their boat capsized in the Mediterranean Sea when it left Libya for Italy.

Survivors told the Red Crescent that the tragedy unfolded after some 75 people who had left Zuwara on the northwestern Libyan coast late Thursday on a large boat were transferred to a smaller one that sank off Tunisia.

Survivors said the boat was heading to Italy and had on board only men, 51 from Bangladesh, as well as three Egyptians, several Moroccans, Chadians and other Africans, AFP reported.