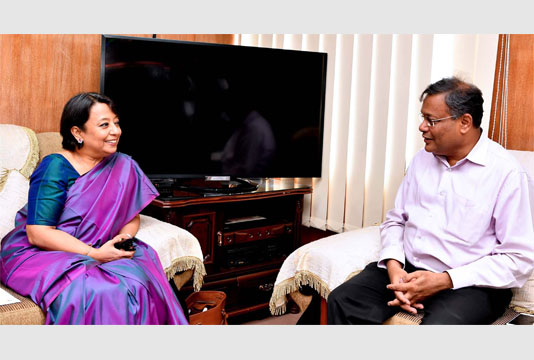 “From a least developed country, Bangladesh has now become a middle-income country. From a country of food shortage, Bangladesh now became a food-surplus country. Bangladesh is moving forward in every sector. Rather, it is BNP, which has become an ineffective party,” Dr Hasan Mahmud said while talking to newsmen at his office.

The minister came up with the observations after coming out of his meeting with Indian High Commissioner Riva Ganguly Das at his office at the secretariat.

Dr Hasan Mahmud said they discussed different aspects of bilateral relations specially the biopic of Father of the Nation Bangabandhu Sheikh Mujibur Rahman at the meeting.

“The scriptwriter of the biopic will come to Bangladesh next week and will be here for two weeks. The Bangladesh-India joint venture film will be made by eminent director Shyam Benegal, where Bangladesh will have 60 percent ownership and India will have 40 percent,” said Dr Hasan Mahmud, who is also the Publicity and Publication Secretary of Bangladesh Awami League.

Replying to question on move of shifting jailed BNP chief Begum Khaleda Zia from former central jail in capital’s Nazimuddin Road to Keraniganj Central Jail, the information minister said BNP was supposed to be happy as they were complaining till now that their leader is being kept at a deserted age-old prison, now she is being taken to a newly made modern jail.