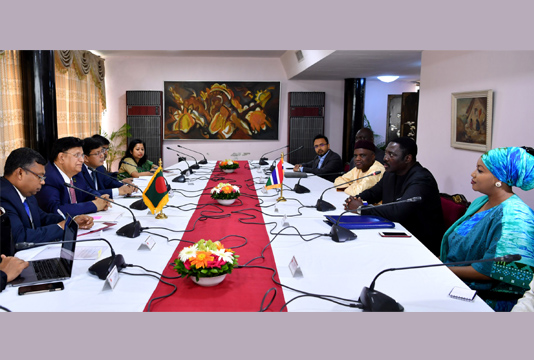 Foreign Minister Dr AK Abdul Momen today said Dhaka will provide all support to Gambia as it has been playing a leading role in holding accountable the perpetrators of atrocities against Rohingyas to the International Court of Justice (ICJ).

“We’ll provide whatever support they need. Anybody involved in criminal activities should be punished,” he told reporters after holding a bilateral meeting with his visiting Gambian counterpart at state guesthouse Meghna here today.

Gambian Foreign Minister Mamadou Tangara is visiting Dhaka as the Special Envoy of the President of Gambia, Adama Barrow.

Momen said Gambia was working to ensure the accountability for those who are responsible for Rohingya repression. “Justice should prevail and no one should be given impunity,” he said.

The Organization of Islamic Cooperation (OIC) recently unanimously adopted a resolution to move the ICJ for establishing the legal rights of Rohingya.

Gambia led the process in OIC with a ten-member high-powered ministerial committee.

Momen thanked those countries who have extended support to Dhaka in resolving the Rohingya crisis and said the issue will be further discussed in the next OIC Summit in Saudi Arabia next week.

The Gambian Foreign Minister said they were committed and ready to work very closely with Bangladesh to find a solution to Rohingya crisis.

During the meeting, Momen briefed the Gambian Foreign Minister about the gravity of crisis that Bangladesh is facing with displaced Rohingyas.

He underlined necessity of creating conducive environment for repatriation of Rohingya to their homeland with the guarantee of safety and security.

“Bangladesh will support all OIC initiatives in this respect as well,” he said.

He informed the delegation that Bangladesh is among the most rapidly growing economies in the world it is expected that the economic growth will exceed 8 percent in the next fiscal year.

Momen told Tangara that there was a necessity of establishing South-South-North Triangular cooperation among developing countries like Bangladesh and Gambia.

He mentioned that cooperation may be established in agriculture and food production sectors with Gambia taking into account Bangladesh’s remarkable success in the fields.

Momen urged Gambian investors to invest in Bangladesh and said cooperation may be established in Energy, agro-processing and SME sectors. Momen also suggested that Gambia may import RMG, pharmaceutical, ships and boats from
Bangladesh.

A Protocol on Bilateral Consultations between Foreign Ministries of Bangladesh and the Gambia was signed by the two Foreign Ministers after the meeting.

The Gambian delegation also comprises the High Commissioner of Gambia in New Delhi and other high officials of the Gambian government.