Iran says no talks with the US as Gulf tensions soar 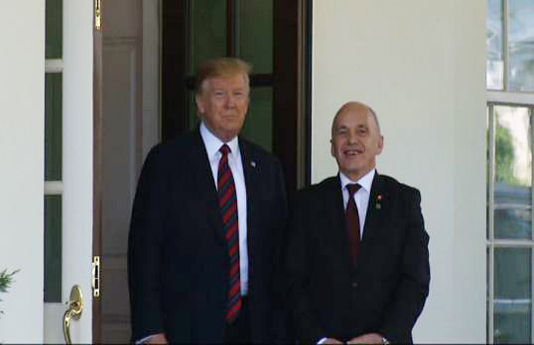 Amid rising tensions in the Gulf, Iran on Thursday rejected negotiations with the US and said it was showing
“maximum restraint” after Washington sent extra military forces to the region against what it claimed was an imminent threat from Tehran.

US officials meanwhile said the deployment of an aircraft carrier strike group and B-52 bombers to the Gulf, one of the world’s most strategic waterways, was in reaction to photographs showing that Iran had loaded missiles onto small traditional boats.

There was “no possibility” of negotiations with the United States, he told reporters. “I don’t know why President Trump is confident.”

“We exercise maximum restraint,” he said, despite the Trump administration’s unilateral move last year to withdraw from the international agreement on Iran’s nuclear program.

On Wednesday, Trump predicted Iran would “soon” want to negotiate, even as the State Department ordered the evacuation of most personnel from the US embassy and consulate in Iraq, fearing an attack by Iranian-directed Shiite militias.

“I’m sure that Iran will want to talk soon,” the president tweeted.

The White House and Pentagon remained under pressure to demonstrate the
reason for the huge buildup in forces and heightened rhetoric of the past 11
days.

Two major pro-Iran armed groups in Iraq rejected allegations that they were
plotting an attack on US diplomatic installations in the country.

Nasr al-Shomari, a military commander for the Iran-backed Harakat al-
Nujaba, told AFP the claim was “a pretext” by Washington to create “an
uproar” in Iraq.

US coalition partners in Iraq had suggested earlier this week that the
threat level there had not risen significantly, and members of Congress
demanded to see the information behind the Trump administration’s warlike
rhetoric.

“I think they should tell us what the hell is going on,” senior Republican
Senator Lindsey Graham told CNN.

A US official said Thursday that Iranian missiles loaded on small,
traditional dhow boats in the Gulf were among the new “threats” to US forces
and allies in the region.

The official, who asked not to be named, confirmed a New York Times report
that US intelligence had aerial photos of the vessels.

“The missiles on civilian boats are a concern,” said the official.

The Trump administration meanwhile appeared divided on how hard of a line
to take.

The deployment of the USS Abraham Lincoln strike group and the bombers was
first announced on May 5 by White House National Security Advisor John
Bolton.

The vocal hawk called the move “a clear and unmistakable message to the
Iranian regime that any attack on United States interests or on those of our
allies will be met with unrelenting force.”

Secretary of State Mike Pompeo said days later that while the US does not
seek a war with Iran, “if American interests are attacked, we will most
certainly respond in an appropriate fashion.”

But The New York Times reported that Trump himself was not entirely happy
with the talk of war and told acting Secretary of Defense Patrick Shanahan
early Thursday that he does not want to a military clash.

Intelligence officials were scheduled to brief congressional leaders
Thursday on the information they have that spurred the new deployments to the
Gulf, after House Speaker Nancy Pelosi warned Trump that the legislature, and
not the president, has the constitutional power to declare war.

“I like what I hear from the president, that he has no appetite for this,”
Pelosi said.

“One of the places that I agree with the president is in both of our opposition to the war in Iraq, and I hope that that same attitude will prevail with (Trump), even though some of his supporters are rattling sabers.”