Tri-series win a boost for Tigers in World Cup 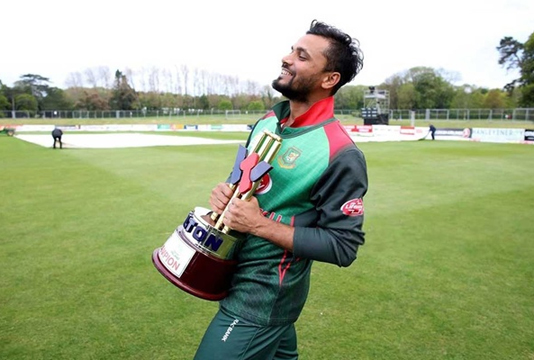 Bangladesh got a timely boost ahead of the World Cup journey, as they ended the final jinx, whacking West Indies past by five wickets, a victory that captain Mashrafe Bin Mortaza cited as ‘confidence booster’ to chase any kind of total.

Having set a 210 runs to victory in 24 overs as per D/L method, Bangladesh reached 213-5 by making a mockery of West Indies bowling attack.

With the World Cup widely being believed to be a run-fest, Mashrafe said the chase of huge total would give them a confidence to hunt down any big target or set a gigantic total in the cricket’s biggest carnival.

Accumulating runs at almost 10 per over spoke a volume of sheer aggression, Mashrafe believed.

What was delighting for Bangladesh that two youngsters-Soumya Sarkar and Mosaddek Hossain Saikat were key in bringing up the watershed moment in the country’s history. While Soumya Sarkar set the platform upfront with 41 ball-66, Mosaddek gave the finishing touch in even more gorgeous fashion, smashing 24 ball-52 not out.

”Yes obviously it is a great feeling,” said Mashrafe after the match. “Hopefully it is just the start and we will continue in this manner in the future.”

”The world cup will be a really challenging one for us and the real challenge is waiting for everyone. This win will have really given us a big boost and the confidence of chasing any big total,” he added.

Having failed to triumph the final on six occasions in different formats in the last 10 years, starting with a heartbreaking two-wicket defeat to Sri Lanka in 2009 in Dhaka and finally the number 7, widely recognized as a lucky number in our country, proved to be preciously lucky for Bangladesh.

The Tigers had their first major heart break when they failed to cross the last hurdle during their appearance in the first tri-nation final in 2009 involving Sri-Lanka and Zimbabwe.

Bangladesh’s second heartbreak was against Pakistan in the 2012 Asia Cup while four years later Bangladesh lost to India in Asia Cup Twenty20 final.

2018 seemed to be the most disappointing year for them as they lost final on three occasions.

First, they lost the tri-nation series final against Sri-Lanka in January and followed that by losing to India in the Nidahas Trophy T20 final. Bangladesh lost in the Asia Cup final in 2018 which saw cricket pundits giving the Tigers as a choker tag.

While they removed chokers tag in a grand style as it also helped them to complete their last preparation for the World Cup with a huge amount of confidence under their belt.

The way Bangladesh batsman played throughout the tournament indicated that they won’t be shy away from trying to score heavily when they reach England for the upcoming ICC World Cup.

The major area for concern was that they are not used to score at a pace unlike some of the other cricketing nation. But chasing West Indies’ target should quell the uncertainty over their ability, said Mashrafe.

The victory sent the cricket crazy nation to the seventh heaven, especially considering as it looked at one stage proceeding toward another heartbreaking defeat in the final for Tigers as West Indies tightened the noose midway through the innings.

The good thing is Bangladesh got a new hero in Mosaddek just ahead of the World Cup. The replacement of real match-winner Shakib, who was ruled out of the match due to back spasm, didn’t give anyone chance to rue for the absence of the ace all-rounder, according to Mashrafe, the most successful captain of the country.

He also attributed the success down to the total team work.

”It’s been a long time we didn’t win but after the seventh attempt we overcame the hurdle. It’s totally team work,” Mashrafe said.

”The wicket was really good and when we bowled we understood it’s favoring the batsman. Tamim and Soumya gave us a really good start. They built the wining stage. Mushfiqur batted really well in the middle while Mosaddek and Riyad finished it really well,” the proud captain concluded.