PM for training to people on traffic rules from school-life 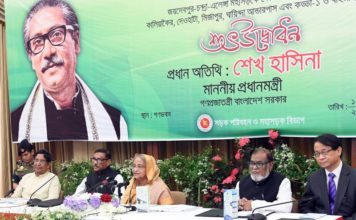 Prime Minister Sheikh Hasina today stressed the need for imparting training to the people on traffic rules and regulations from childhood or school-life to make them aware of using roads and their safety.

“I personally belief, it is really needed to give training (to the people) on traffic rules and regulations from childhood or school life to make them cautious about using roads and their safety as well,” she said.

The premier was opening the four-lane second Meghna and second Gumti bridges on Dhaka-Chottagram Highway through a video conference from her official Ganabhaban residence here.

The premier called upon the authorities concerned of educational institutions particularly the schools to take their own initiatives to help their students to cross the roads towards the institutions at school breakups.

“You (authorities of educational institutions) should take the initiative to engage your own people for assisting your students in crossing the roads while law enforcers and traffic policemen will extend support to this endeavor,” she asked the school authorities.

In this context, she referred that authorities in abroad stand with placard to help their students to use the roads adjacent to the educational institutions.

The premier also called upon the drivers to drive cautiously keeping speed limit of their vehicles under control and advised the pedestrians to use foot-over bridges and underpasses and be careful while crossing the roads to reduce the road accidents.

Mentioning the enactment of Road Transport Act, 2018 by her government and starting the implementation of the law to reduce the road accidents, the premier said, “It is also necessary to impart the drivers with proper training on driving and traffic rules.”

The government has taken initiatives to train the drivers at upazila levels alongside setting up places for relaxation of drivers besides highways and roads.

Japanese Ambassador to Bangladesh Hiroyasu Izumi also spoke on the occasion. Indonesian Ambassador in Dhaka Rina P. Soemarno was present at that time.

The premier said the government has been working to improve living standard of the people by freeing the country from poverty following the footsteps of Father of the Nation Bangabandhu Sheikh Mujibur Rahman.

“We’re taking the country to the path of development by reducing poverty…we’ve always one goal — to develop a people’s lifestyle, free them from poverty and make the country economically self-reliant,” she said.

Unveiling the development schemes, the prime minister said, “The schemes will help accelerate the pace of industrialization, trade and commerce and thus increase the standard of lives of the people alongside decreasing traffic gridlocks and saving time.”

Describing the world as a global village, she said that the uplift schemes are not only playing a significant role for Bangladesh’s development but also for the regional connectivity and cooperation.

In this context, she thanked the Japanese government, other friendly countries and development partners, including ADB, for extending their supports to Bangladesh, saying, “We are maintaining friendly relations with all following the foreign policy ‘friendship to all, malice to none.”

“We are advancing towards the development and prosperity taking assistances from the friendly countries and most importantly from the people of the country,” she mentioned.

Highlighting her government’s initiatives in the last 10 years for the development of roads and railways, the premier said that a total of 417 kilometers of highways have been upgraded to four-lane while the Jatrabari-Kanchpur Highway has been made eight-lane, a 80km marine drive has been constructed from Teknaf to Cox’s Bazar and seven flyovers have already been built in Dhaka, Chattogram, Cumilla, and Tongi.

The government has a plan to develop a massive nationwide communications network involving roads, rails, naval and air ways for making transportation of the people and goods easier which to boost the socio-economic development, she added.

The construction of 46073 kilometers Dhaka expressway under the public private partnership (PPP), 20 kms rapid road transit from Gazipur to Bimanbandar and metro rail are going on, she said, adding that once the constructions of those are completed, the communication system will develop and traffic jam will reduce.

Sheikh Hasina said the Dhaka-Sylhet highway will be made four-lane and a project to this respect has already been taken.

The introduction of the “Panchagarh Express” ahead of the Eid will help easing the sufferings of the home-goers on Dhaka-Panchagarh route.

The government has already built rail brides on the Padma Bridge and the Jamuna Bridge, she also said.

For the development of rail communications, she said, the government has already constructed many new railway tracks alongside repairing the existing ones.

The government has recruited a large number of manpower for Bangladesh Railways and decided to appoint more, she also said.

Recalling the contribution of Father of the Nation Bangabandhu Sheikh Mujibur Rahman to nation building, the premier said that during his visit to Japan, Bangabandhu had requested then Japanese government to make a feasibility study for the construction of Jamuna Bridge.

Describing Japan as a trusted friend and development partner of Bangladesh, she said, “Japan has done a lot for us since the Liberation War and the time of reorganizing a war-ravaged country after achieving independence in 1971.”