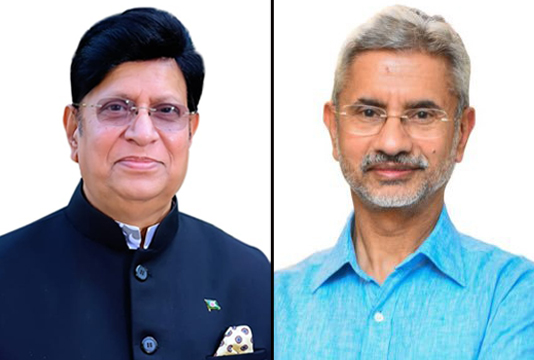 Foreign Minister Dr AK Abdul Momen said Dhaka was looking forward to an early visit from India’s newly appointed foreign minister Dr S Jaishankar’s. “India was the first country that I visited after taking office as foreign minister. So I hope, he (Jaishankar) would visit Bangladesh early,” he told reporters at his office.

Momen said he recently received a warm letter from his Indian counterpart where Jaishankar expressed his commitment to bring the Indo-Bangladesh partnership up to the level set by Father of the Nation Bangabandhu Sheikh Mujibur Rahman after the War of Liberation in 1971.

Admiring Jaishankar as an icon in the diplomatic world, Momen said he hoped Dhaka would be able to work with him in a good manner. The Bangladesh foreign minister said that Bangladesh and India would continue as partners for alleviating poverty in the region in the days to come.

In a letter to his Bangladesh counterpart on June 4, Jaishankar expressed his keen interest to visit Bangladesh soon. The Indian foreign minister said relation between the two close neighbors had become deeper due to the wise and far-sighted leadership of Prime Minister Sheikh Hasina and her Indian counterpart Narendra Modi.

Jaishankar observed the recent electoral victories of Bangladesh Awami League and Indian National Democratic Alliance with huge mandates showed that the people in both the countries were in favour of Bangladesh-India partnership.