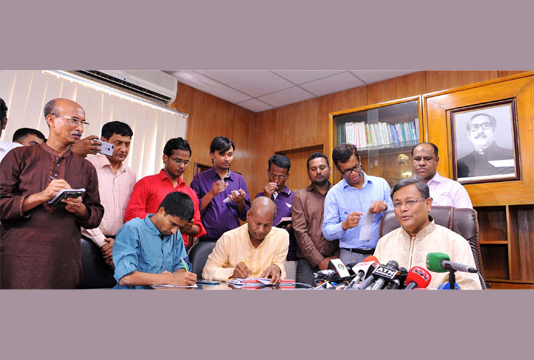 “Their activities and actions lack political courtesy,” Hasan told newsmen at his Bangladesh Secretariat office here referring to a comment of Alamgir about Prime Minister Sheikh Hasina’s remarks at her press conference yesterday.

He reminded the newsmen that Sheikh Hasina went to BNP chief Begum Khaleda Zia’s house to show her sympathy after her son Arafat Rahman Koko’s death when “no one opened the door”.

The premier yesterday said Rahman would be exposed to justice as process was underway to bring him back to execute the court order.

“We don’t need to learn courtesy or etiquette from BNP. I want to urge Mirza Fakhrul to educate his party leaders and activists about the courtesy,” said Hasan, also the publicity and publication secretary of ruling Awami League.

He said the premier earlier phoned Khaleda Zia for inviting her for a dinner and “the people of the country heard her (Begum Zia) language”. Hasan reaffirmed echoed the premier’s comments saying Tarique Rahman was destined to face his punishment one day.

“It is the duty of the state to ensure the execution of a convict’s punishment and that is what Prime Minister Sheikh Hasina pointed out yesterday” he said. “One day, Tarique will have to face the punishment handed down by the court,” the minister added.

Replying to a question, Hasan said the Jatiya Oikyafront became turned to be a “mockery” as they demonstrated extreme disunity and lacked ideology. “Many parties and leaders have already quitted the Oikyafront,” he said.

Later, the minister greeted the countrymen including the media personnel on the occasion of holy Eid-ul-Fitr and exchanged greeting with the officials and employees of the Information Ministry at his office.