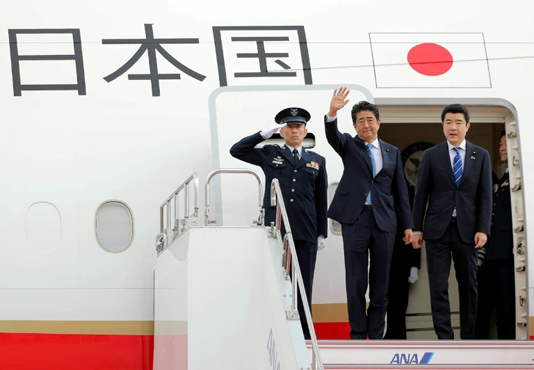 Japan’s Prime Minister Shinzo Abe is expected in Tehran on Wednesday for a rare diplomatic mission, hoping to ease tensions between the Islamic republic and Tokyo’s key ally Washington. The first Japanese prime minister to visit Iran in 41 years, Abe is expected to arrive in Tehran at around 1120 GMT and go straight into talks with President Hassan Rouhani.

Tehran is locked in a bitter standoff with Washington after President Donald Trump withdrew from a landmark 2015 nuclear deal in May last year. Washington has since reimposed crippling unilateral sanctions that have forced Japan to halt its once substantial purchases of Iranian oil and launched a military buildup in the Gulf.

“Amid concerns over growing tension in the Middle East and with the attention of the international community on the issue, Japan wishes to do its best towards peace and stability in the region,” Abe told reporters in Tokyo before leaving for Tehran.

“Based on traditional friendly ties between Japan and Iran, I would like to have candid exchanges of opinions with President Rouhani and supreme leader Khamenei towards easing tensions,” he said.

Japanese government officials say Abe will not present Tehran with a list
of demands, or deliver a message from Washington, and instead want to play
the role of neutral intermediary.

On Tuesday, Abe discussed “the situation in Iran” in a telephone call with
Trump, a Japanese government spokesman said.

A government official said Abe will not be in Tehran to “mediate between
Iran and the US” and that “easing tensions” was the prime purpose.

“He might touch upon the subject (of mediation) but that does not
necessarily mean he is delivering a message” from Washington, he added.

After holding talks with Rouhani on Wednesday, Abe is to meet Iran’s
supreme leader on Thursday morning.

Japan is hoping to lower the temperature, officials say.

Abe won Trump’s blessing for the mediation mission when the US president
visited Tokyo last month.

“We believe it is extremely important that, at the leadership level, we
call on Iran as a major regional power to ease tension, to adhere to the
nuclear agreement and to play a constructive role for the region’s
stability,” Chief Cabinet Secretary Yoshihide Suga said ahead of the trip.

Iran newspapers divided along conservative-reformist lines in their
assessments of Abe’s visit.

The reformist Sazandegi daily ran a front-page cartoon of Abe in full
samurai armour, a rolled piece of paper in one hand and a shield on the
other.

In an accompanying article headlined “A samurai in Tehran,” the paper said
everyone was waiting to see “Tehran’s reaction to Japan’s initiative to raise
its international standing by mediating as both Washington’s ally and Iran’s
friend.”

The ultra-conservative Javan daily, warned that “Iran and Japan minus
America” could be a winning formula for Abe, but “Japan as America’s
intermediary in Iran” would fail given the deep mistrust of the US.

Other Iranian commentators said Abe could pass messages between the two
sides.

But while Tokyo has longstanding trade ties with Tehran and close relations
with Washington, experts say Abe has little leverage with either side and
mediation will be an uphill struggle.

The trip by the Japanese PM “faces substantial obstacles and is unlikely to bear fruit,” Tobias Harris, an analyst at Teneo consultancy group, said in a note. “While Japan has good relationships with countries on both sides, these relationships do not necessarily translate into influence.”