President urges guardians not to put pressure on children for study 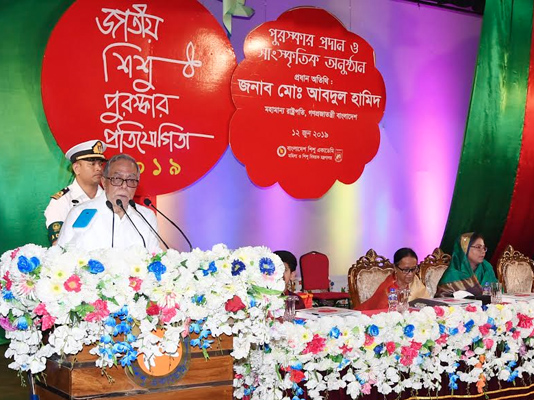 President M Abdul Hamid today urged the guardians not to put pressure on children over study or any other issue and let them flourish by creating a conducive environment.

The head of the state called upon the parents and guardians not to run after only GPA-5; rather create opportunities for children to take lessons from nature and help them groom as individuals with the necessary human values.

“Then they (children) will become the most valuable asset of the country as well nation,” the President said, advising the guardians to help them become self-reliant in all aspects.

Stressing on flourishing the spirit of independence and the Liberation War among the children since the very beginning of student life, he said, “You (children) must learn to love the country . . . Never do compromise with the wrong and the untruth.”

“If you move towards the way of truth, beauty and justice, you will shine in life,” Abdul Hamid added

The President also mentioned different development activities of the present government in line with the dream of Father of the Nation Bangabandhu Sheikh Mujibur Rahman who enacted the National Children Act -1974 as part of ensuring the fundamental rights of the children.

“The Father of the Nation loved children very much. He wanted to materialize the dream of building a ‘Sonar Bangla’ with them,” he mentioned.

Recalling Bangabandhu’s childhood, the President said since his childhood the Father of the Nation came forward to stand by the poor and the helpless and even he donated his dressed-in shirt to a poor man and then returned home without a shirt.

“You have to take lessons from Bangabandhu, who was a very helpful man and possessed unpromising leadership quality,” he said.

The President asked all including senior citizens, family, society and state to play responsible roles to ensure rights of the children and help them flourish their inner potentials in a friendly environment.

“Build awareness on social and religious values along with their (children) academic curriculum so that they remain free from superstitions and religious fanaticism,” he said.

Today’s children, President Hamid said, will lead Bangladesh in future and they would help promote the Bengali culture being imbued with the spirit of patriotism, Bengali language, free-thinking and human moral values.

The President earlier distributed prizes and medals among 30 out of 237 winners. Since January 19, a total of 3,27,127 participants took part in 30 disciplines including painting, dance, recitation, acting and music.

The President also enjoyed a cultural function joined a photo session with the winner children.