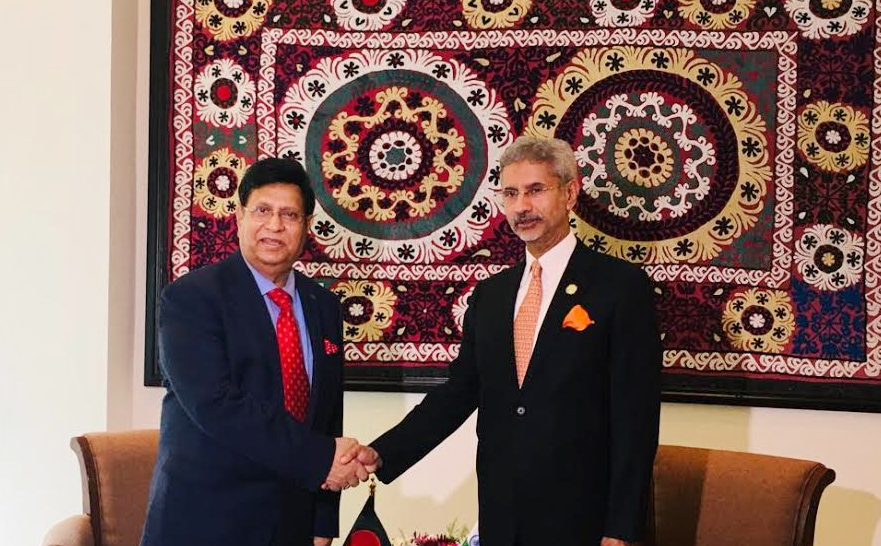 “He (Momen) drew the Indian counterpart’s attention towards the pending much expected Teesta (water sharing) treaty and . . . the foreign minister sought India’s active support and cooperation in resolving the Rohingya problem,” the statement read.

It said Momen simultaneously urged the Indian counterpart to take effective steps to stop killings on the Bangladesh-India borders by the Indian border guards.

The two foreign ministers held their first meeting last night at a hotel in Tajik capital Dushanbe on Friday where Momen is accompanying President M Abdul Hamid to the 5th Conference on Interaction and Confidence Building Measures in Asia (CICA).

The Indian foreign minister, the statement said, assured Momen about necessary Indian cooperation regarding the issues as the Modi government “shows mature sensitivity” in developing friendly relations with neighboring countries.

Jayshankar, who previously served as India’s top bureaucrat, termed Bangladesh as gateway of New Delhi’s “look east economic diplomacy” in view of its geostrategic location and said the feature could benefit both the countries as well as BIMSTEC, the regional economic forum.

Mentioning that he visited India as the first country after appointed as foreign minister, Momen also invited his Indian counterpart to visit Bangladesh soon.

Jaishankar hoped that he will visit Bangladesh soon at his convenient time.

The two foreign ministers expressed their satisfactions over the existing deep cordial bilateral relations between Bangladesh and India and hoped that it will further be expanded in the days to come.

Momen said it is an example for the world that how Prime Ministers Sheikh Hasina and Narendra Modi lifted Bangladesh-India ties at an unprecedented height by resolving prolonged sensitive disputes through their political insights and farsighted matured leadership.