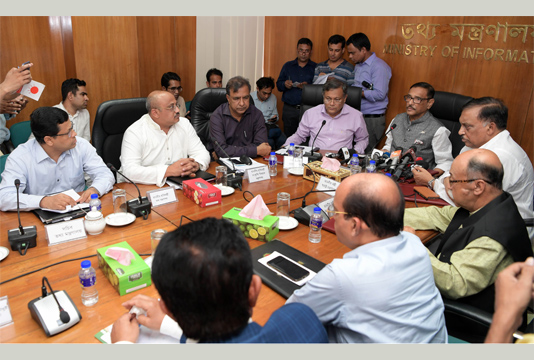 Road Transport and Bridges Minister Obaidul Quader today said the ninth wage board award for journalists and employees of newspapers and news agencies will be announced soon in consultation with Prime Minister Sheikh Hasina.

“We don’t want to keep this issue stalled for long. . . We have reached nearly the final stage. The cabinet committee will sit now and the new wage board award will be declared soon after consultation with the Prime Minister,” he said.

He was briefing reporters after a meeting between the cabinet committee on the 9th wage board and stakeholders at the information ministry’s conference room at the secretariat here. The stakeholders included journalists, employees and Newspaper Owners’ Association of Bangladesh (NOAB).

Quader, also General Secretary of Awami League and convener of the cabinet committee, said, “Everyone shared opinions with us. We listened to them. And there is no need to waste more time on this issue.”

“We discussed it with the stakeholders for a long time and this was our last meeting with them,” he added.