Begum Zia can be released only in legal way: Hasan 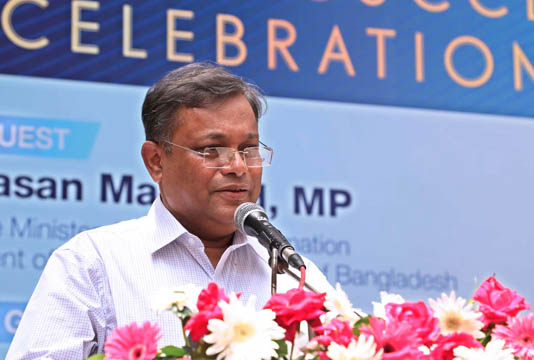 “Begum Zia is in prison after being convicted in a graft case and her release would not be possible through movement as it is the only court that can release her,” he told reporters after attending a function at North South University Campus (NSU) in city’s Bashundhara area.

Dr Hasan, also Awami League publicity and publication secretary, said BNP always gives threat that they will wage movement, but the countrymen don’t know when they will go for such movement. “I want to urge them not to make those funny talks anymore,” he added.

He said Begum Zia has already got bail in some cases. So, there is no other ways to release her as the court will decide whether she will be released or not, the minister added. NSU organized the function for celebrating the ranking success as Bangladesh’s top private university.

Urging students learn how to dream, Hasan said dream is must for a human being. Otherwise none can move ahead, he said, adding that there will be needed efforts to make the dream true.

“If you don’t give efforts then your dream would not become true,” he said. The minister also urged the students to nourish dream not only for themselves but also for the society as well.

DR Hasan urged the private universities authorities to give more scholarships to the meritorious students. Former lawmaker and Chairman of the Board of Trustee of NSU MA Hashem was present in the function as special guest.