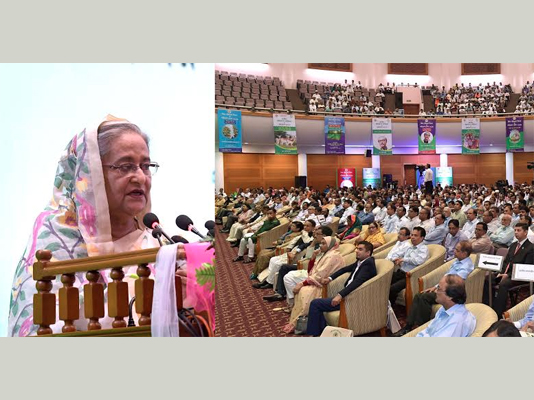 Prime Minister Sheikh Hasina today asked development planners to revise some typical concepts to save the environment particularly the water bodies as she opened the World Environment Day celebrations in Bangladesh.

“Take development projects keeping in the mind about its consequences on environment,” she said inaugurating the celebrations that also coincide with the National Tree Fair-2019, Environment Fair-2019 and Tree Plantation Campaign at Bangabandhu International Conference Centre (BICC) here.

The premier particularly asked infrastructures planners to discard ideas like filling up canals and ponds coming out of their traditional mindset like constructing box culverts disrupting natural water flows on canals. “We can construct roads on both sides of canals or build elevated road on the canals keeping those water bodies intact,” she said.

Environment, Forest and Climate Change Minister for M. Shahab Uddin, Chairman of the Parliamentary Standing Committee on the ministry Saber Hossain Chowdhury and environment secretary Abdullah Al Mohshin Chowdhury
spoke, among others, on the occasion.

Sheikh Hasina simultaneously urged all the people to plant at least one fruit bearing, one timber and one herbal sapling to maintain natural and ecological balance of the country.

She recalled her childhood memories of sapling tress particularly in her alma mater Azimpur Government Girls School and College the premier urged all to plant some saplings at their homesteads and workplaces and schools,
colleges and universities and “teach your children on how to plant trees and nurture them”.

The theme of this year’s World Environment Day is “Air Pollution” while the theme of the National Tree Plantation Campaign is “Forest and Ecology in Education Building Modern Bangladesh”.

The premier said the country must strike a balance between its development spree and environmental conservation saying the development activities would go on but protection of environment would have to be ensured as well.

Referring to various measures in protecting the Surdarbans, the Prime
Minister categorically said, her government always puts especial importance
on maintaining ecological and natural balance of the world’s largest mangrove
forest in the southwestern region.

The premier said as part of her initiatives Sundarban’s conservation, the
pirates there were forced to surrender in exchange of incentives while people
in the neighbourhood were also offered alternative employment opportunities
soothe do not over exploit the forest.

Sheikh Hasina said, her government has taken various steps to preserve bio-
diversity in the country alongside natural resources through sustainable
management in parts of the country.

In the programme, the premier handed over National Environment Award-2019,
Bangabandhu Award for Wildlife Conservation-2019″ among those who contributed
to environmental and wildlife conservations in their respective areas and
distributed “Prime Minister’s National Award-2018” among organisations and
individuals in different categories for their contribution to tree plantation
campaign.

She also handed over Cheques among the beneficiaries of the social forestry
programme.

Bangladesh Forest Research Institute (BFRI) and Envoy Textiles Limited received the environmental awards under the organisation category. Sheikh Hasina said when the Awami League assumed power in 1996, only seven percent of the land was under forestation while it stands at over 15 percent now.

“We are looking to bringing 20 percent of the land under forestation in the days to come,” she added. The premier said her party has been implementing a nationwide programme of planting one lakh saplings of various trees from early Ashar since it was in opposition in 1984-85.

She requested all the leaders and workers of her party to plant at least three saplings marking the programme.

Highlighting various measures taken by her government, the prime minister said they have been pursuing a number of plans so that Bangladesh is not affected by the adverse impacts of climate change.

Regarding the government’s programmes to safeguard the Sundarbans, she said, “Our Sundarbans is the largest mangrove forest and we have taken a number of projects to protect it”.

Noting that the main task to save the Sundarbans is to reduce salinity of the rivers adjoining the mangrove forest, for which, she said, “The government is now conducting dredging of the rivers.”

Besides, the government is now building green belt across the Sundarbans to save it from devastation, she continued.

Putting emphasis on creating awareness to protect the environment for the future generation, the premier said, “We have formulated Delta Plan 2100 to give our future generation a beautiful future.”

In this regard, she said, the environment is being polluted with the increase in the use of machine, adding, “Detergent, soap, shampoo, and other things are contributing to the environment pollution.”

“People are damaging environment in many ways for living a comfortable life,” she said, urging the researchers to come forward with new innovation to stamp out the man-made pollution alongside planting trees.

Mentioning that the air is being polluted due to irresponsible behaviour of the people, the premier said, “Forty-two lakh people died every year as a result of exposure to outdoor air pollution while 38 lakh for exposure to household smoke from dirty cook stoves or fuels according to WHO.”

To control air pollution, the government has enacted the “Brick Manufacturing and Brick Kiln Establishment (Control) Act 2013” which was amended in 2018, she said. Mobile courts are now being operated in Dhaka and other big cities to control the black smoke of vehicle, she added.

The government has adopted country investment plan-CIP 2016-2021 to take sustainable development projects to face the adverse impact of climate change, she said.

About social forest programme, the premier said, social forestation has been created involving poor communities residing beside the forests and 75 percent profit is now being given to the people who are taking care of the trees planted on the government land while the rest 25 percent is being deposited to the public exchequer.

“I, that mean Bangladesh, have achieved ‘Champion of the Earth’ award in 2015 in recognition to the measures taken to face successfully the adverse impacts of climate change,” she said.

The premier said Bangladesh’s Environment, Forest, and Climate Change Ministry has achieved the Certificate of Appreciation while Bangladesh was elected as vice-president of the executive body of South Asia Cooperative Environment Programme (SACEP) for successfully facing the adverse impacts of climate change.

The government has taken Bangladesh Climate Change Strategy and Action Plan to face the climate change effects, the premier said, adding that Climate Change Trust Fund has been raised where Taka 3500 crore has been allocated to implement to the strategy.