Giving away easy runs is key reason behind defeat: Mashrafe 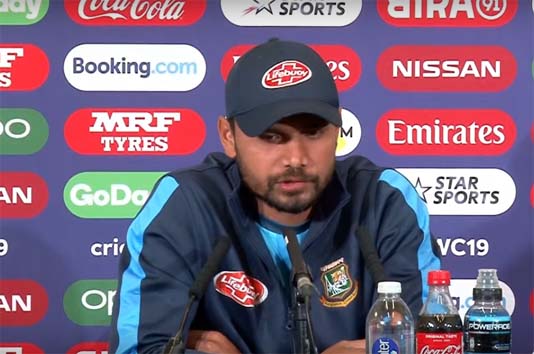 Bangladesh skipper Mashrafe Bin Mortaza insisted they could save at least 40 to 50 runs if they could be proactive more in the match eventually lost by 48 runs against Australia at Trent Bridge in Nottingham yesterday.

Bangladesh waged a massive battle before conceding the defeat to Australia who left the Tigers to uphill task, compiling a hefty 381-5, thanks to an epic 146 ball-166 runs by David Warner. The Tigers finally were restricted to 333-8, their highest total in ODI cricket history, eclipsing 330-6 against South Africa in this World Cup opener.

The victory took Australia to the top of the point table with 10 points from six games. Bangladesh sits at the fifth position with five from six matches, but mathematically the Tigers are still in the semifinal race.

“I think we gave away 40-50 on the field. Otherwise, it could have been a different chase,” said Mashrafee after the match. “Credit to Warner and other Australian batsmen…the way they accumulated runs” he said. Bangladesh bowled first after Australia captain Aaron Finch won the toss and opted to bat, predicting the ground a good surface to bat first.

The Tigers brought up two changes to the squad with Mohammad Saifuddin and Mosaddek Hossain Saikar being ruled out due to back and shoulder injury respectively. Fast bowler Rubel Hossain and batsman Sabbir Rahman replaced them in the squad.

“This is the best we have and few newcomers have come in to be honest, we have been positive,” said Mashrafee. “Soumya got run out and Shakib-Tamim did well but 381 runs was tough in any wicket,” he said, adding that now they have to win all the remaining matches to have a chance to qualify for the semi-final. Bangladesh will play Afghanistan, India and Pakistan in the last three group matches.

“It is tougher but we have to make sure that we would win all matches that are left and then we have to wait for the result of other matches. But in cricket anything can be happened. So we are not giving up hope at the moment” Mashrafe said.