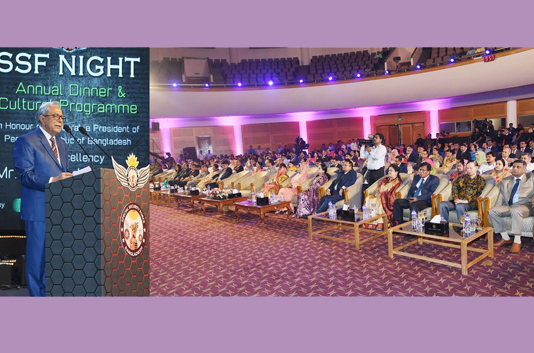 The head of the state said the SSF personnel must keep in mind that they were entrusted with the task of providing security to “highly distinguished people” and credit will go to them if they can ensure utmost professionalism keeping the matter of public relations as usual and not creating any gap with the common people.

President Hamid said SSF would earn appreciation if it could deliver its optimum professional services without creating any gap with masses and added “always keep two things in mind simultaneously — security and the issue of public relations”.

He hoped that the elite force could build themselves as efficient and time-befitting personnel in terms of developed human resources, technological advancement, professionalism and loyalty.

“Every SSF personnel should cope with emerging challenges of changing time to provide security protections to VVIPs,” the President added.

“The responsibility of providing foolproof security to the VVIPs gradually has become challenging due to Bangladesh’s political perspectives . . . conspiracies of the anti-liberation forces and international terrorism,” he mentioned.

He expected the SSF to become an “ideal security force” being imbued with patriotism and cordiality alongside efficient leadership, proper guidelines and professionalism.

SSF was called Presidential Security Force (PSF) when it was floated in 1986 and renamed subsequently as it was tasked to provide the security to the head of the government and VVIP foreign dignitaries as well.

Earlier, the President attended a cultural programme followed by a dinner.