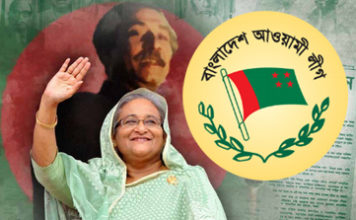 In Rangpur, the 70th founding anniversary of Bangladesh Awami League (AL) was celebrated in the city through various colourful programmes amid huge enthusiasm and festivity.

The district unit of AL hoisted the national and party flags atop party office and placed wreaths at Bangabandhu’s Mural on the Bangabandhu Square in the city. Besides, a colourful rally was brought out in the streets.

Later, a discussion was arranged on the Bangabandhu Square premises with Acting President of district AL Mamtaz Uddin Ahmed in the chair.

In Rajshahi, local units of Bangladesh Awami League and its associate organizations celebrated the 70th founding anniversary of the party in a befitting manner with fanfare and jubilation.

Leaders and workers of the party led by its city unit president AHM Khairuzzaman Liton placed floral wreaths at the portraits of Father of the Nation Bangabandhu Sheikh Mujibur Rahman and four national leaders on the party office premises marking the day.

Subsequently, they cut a 70-pound cake there amidst clapping by the party leaders and workers side by side with holding doa mahfil seeking blessings of the almighty Allah for the departed souls of Bangabandhu and his family members and four other national leaders.

Besides, a brief discussion meeting was also held there highlighting the life and works of Bangabandhu Sheikh Mujibur Rahman.

A colourful rally was brought out from the party office premises and paraded the city thoroughfares before being ended at Lalon Shah Park.

In Manikganj, the 70th founding anniversary of Bangladesh Awami League(AL) was observed here in Manikganj with various programmes.

On this occasion a colourful rally was brought out from the Awami League district office which paraded the main streets of the town and ended at the Bijoy Mela Math. After the rally a discussion was held at the Freedom Fighters Memorial.

Health and Family Welfare Mainister Zahid Maleque was present in the discussion as the chief guest with Advocate Golam Mohiuddin, President of Manikganj District unit of Awami league and Chairman, Manikganj Zila Parishad, in the chair.

The speakers in the discussion described the long revolutionary history of the party and the activities of the great leaders. They recalled the glorious and dynamic leadership of the Father of the Nation Bangabandhu Sheikh Mujibur Rahman. The speakers also highlighted the achievements of the present government of Prime Minister Sheikh Hasina.

Earlier, the leaders of Awami League and its front organizations placed the wreaths at the portrait of the Father of the Nation Bangabandhu Sheikh Mujibur Rahman and hoisted the National flag.

In Khulna, local units of Bangladesh Awami League and its associate organizations celebrated the 70th founding anniversary of the party through organizing various programmes. The prohrammes included rally and discussion.

Leaders and activists of Awami League joined the programmes highlighting the glorious role of the party during different crucial periods of Bangladesh.