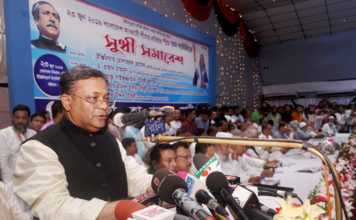 Information Minister and Awami League Publicity and Publication Secretary Dr Hasan Mahmud today said Awami League would need to stay in power uninterruptedly to continue the current trend of development as the country is moving forward under the leadership of Awami League.

“The country is moving forward under the leadership of Awami League. Awami League will stay in power as long as the people will support the party,” he told a rally marking the founding anniversary of AL in Engineers’ Institution auditorium in the city.

The minister said AL has been turned into a party of masses over the 70 years as the party has made politics people-oriented.

The AL publicity secretary underscored the need for identifying intruders and opportunists in AL.

He said Awami League should stay in power uninterruptedly to continue the current trend of development.

Hasan said had Bangabandhu remained alive, Bangladesh would have become developed nation like Singapore many years ago.

But, the anti-liberation forces did not want that and they perpetrated the assassination of the country’s founding father.

“The perpetrators thought that if Bangabandhu would not remain alive, the country could not go ahead. But Bangabandhu’s daughter Sheikh Hasina did not let it happen. Under her leadership, the country is advancing,” he said.