All eligible institutions will be brought under MPO system: Dipu Moni 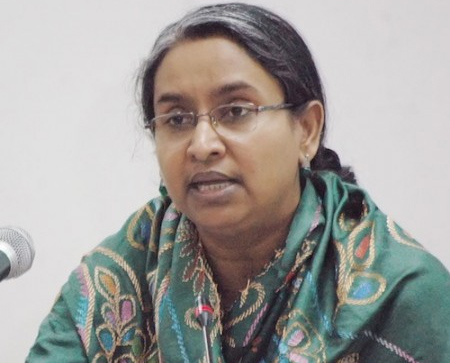 “Our aim is not to make anyone deprived of. Our aim is to develop our education….The Sheikh Hasina-led government has decided to bring all the country’s efficient and eligible institutions under the MPO system,” she told the Jatiya Sangsad while taking part in the general discussion on the national budget for fiscal 2019-20.

The education minister said all should work together to make the ineligible institutions eligible so that those could be brought under MPO system.

The business bodies and economists termed the proposed budget a public- centred and implementable one, she added.

The government also announced a mega budget for fiscal 2019-20 and it would be able to implement this budget too, he said.

The budget, which was announced standing on the wreckages of militancy, will pave a way to achieve the goals set for 2021 and 2041, Inu said.

But, he said, the defaulted loans should be realised, and tax dodging and corruption must be prevented. Inu suggested increasing allocation in education, health, agriculture and public-oriented sectors in the proposed budget.

Opposition BNP lawmaker Abdus Sattar Bhuiyan was critical of some budgetary measures saying implementation of this highly ambitious budget would be a big challenge. He also asked for reign in the bank default loans.

Taking part in the general discussion on the national budget today, lawmakers mostly concentrated on ruling Bangladesh Awami League’s 70th founding anniversary in the House rather than on the fiscal plan.

They said the proposed budget will help turn the country into a prosperous one through developing its various sectors and transformation of the rural dominated country into an urban Bangladesh.

On June 13 in the Jatiya Sangsad, Finance Minister AHM Mustafa Kamal unveiled a Tk 5,23,190 crore national budget for fiscal 2019-20, setting up GDP growth target at 8.2 percent and outlining a set of programmes to transform the country into a role model of a modern and welfare state by 2041.

Earlier, the lawmakers paid their cordial tributes to the memory of Father of the Nation Bangabandhu Sheikh Mujibur Rahman, four national leaders, martyred freedom fighters and also those who made their supreme sacrifice
during the War of Liberation and all subsequent democratic movements of the country.