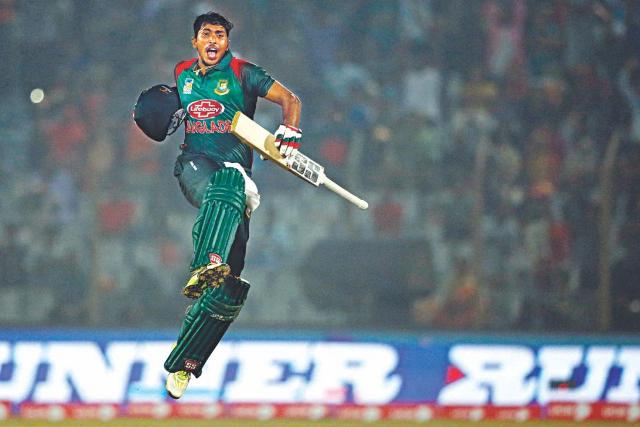 As long as Soumya Sarkar was in the crease he looked to destine for bigger things but sadly it didn’t materialize properly as the batsmen continued to be out after a fluent cameo.

It’s a matter of concern for not only the team management but for him also. The team management still backed him but continuous failure would lower the confidence at some point, a thing what Soumya knows very well.

“If I could make the innings bigger, the question would have never raised. The way I got out after having a good start, I should make it count,” Soumya said.

Having said that he promised he would amend it by playing two big innings in the rest of the two matches against India and Pakistan, what turned out to be ‘do or die’ match for Bangladesh.

“Still I have two matches left. If I could do well, it would be good for me as well.”

Soumya knows well how a bigger knock from him would benefit the side.

“I have been getting out after 30/40. If I could be patient and take my time to make it 50 plus, it would have benefitted the team more. However I know if I could do well, it will serve the team well.”

One of the main reasons behind Soumya’s failure to make his innings bigger attributed down to his fluent batting as he always looks keen to make runs as much as it is possible.

“The time when I got out, runs were coming fluently. So my plan was to pick up some quick runs so that the next batsmen didn’t feel any pressure after coming to the crease. What was my thinking was that if I can handle the situation, the next batsmen would get enough time to set but the pressure of run rate won’t be felt.”

“Whatever the wicket, I never curb the aggression and play my natural game. I always try to be positive.”

Soumya’s plan may have served the team well and others but didn’t serve him well. That is the testament of how selfless he is.

And there is another proof. When he was told to bat at No. 5 position during the game against Afghanistan, he agreed without any second thought.

Bangladesh’s plan was to send a right and left hand combination in Liton Das and Tamim Iqbal to deal with Mujeeb Ur Rahman threat.

Soumya batted at No. 5 and could score just 3, before ironically got dismissed by Mujeeb. There was however sense of belief that there would be nothing problem to send Soumya in opening.

“I had no problem with this decision. It’s a team game and where the team wants me, I am ready to bat there. This was a gamble indeed. If we could be successful, there wouldn’t have any discussion with it.”

However while most of the players went into holiday mood after team management allowed them a break, Soumya chose to keep practicing in a bid to get him back in form.

“Batting is such thing that the more you will bat, the more you will be better. Normally when I get the opportunity I try to do some skill training or drill. There is necessity to have rest because it’s a long tour. But those who are in good touch can afford that luxury.”