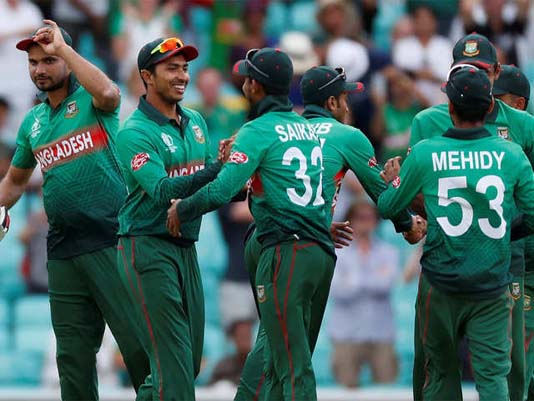 Despite not winning any match in any format of cricket against India since their landmark bilateral series victory in 2015 at home, Bangladesh came agonizingly close to beat the sub-continent rivals on three occasions in the past two years.

Luck betrayed them in every occasion as they lost the match in the last ball each time.

In ICC World T20 in 2016, Bangladesh lost to India by one run, failing to take nine runs in the last over after Mushfiqur Rahim and Mahmudullah Riyad went for glory shots only to throw away their wickets when the side needs just two runs in three balls.

However Bangladesh’s record against India in Birmingham, where they would face off them on July 2 is not encouraging also. India beat Bangladesh here by eight wickets in the 2017 ICC Champions Trophy semifinal.

Considering all those factors, Bangladesh off-spinner Mehidy Hasan Miraz believed, to beat such a strong team, who are favourites to win the World Cup, they need some favour of luck.

“The matches we have played against India, we lost after coming so close. I would say luck wasn’t our side and so we couldn’t finish the game well,’ said Miraz.

”We have been playing good cricket and we are capable of beating them but we also need some luck, considering the consequences of the last two encounters in the last year. If luck is with us this time, we will win the match,” he added.

Miraz further said that they are not interested to lose their sleep thinking too much about their opponent.

“Of course India is a tough opponent. They are playing dominating cricket and good cricket. Nevertheless we are not taking any pressure. If we can play our natural game we will do well,” a confident Miraz said.

”Everyone is confident while every member of the team is in good shape because team is playing well,” he said.

He also heap of praises on his senior colleagues, especially Shakib Al Hasan, who has been in fabulous form and so far the best player of this World Cup.

”Shakib Al Hasan is dominating everyone. He is one of the highest run-getters with the bat and taking wickets regularly,” he said.

“Mushfiqur Rahim and Mahmudullah Riyad are playing well. Tamim Iqbal has also played some good innings. Liton Das has played a marvelous innings while among the juniors me along with Saifuddin, Mustafizur and Mosaddek are trying to give our hundred percent,” he said.

”We are trying to put our collective effort with seniors leading the way.”