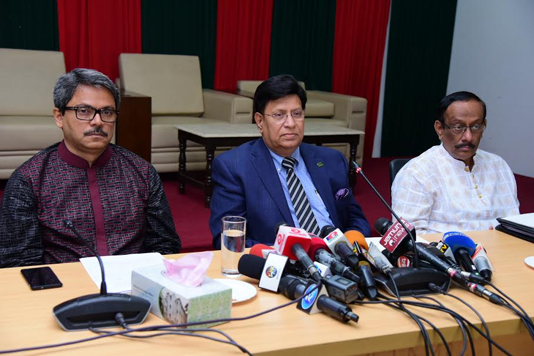 “The Rohingya issue will come up as a major topic during our Prime Minister’s visit … we do believe, after that, Beijing will take a ‘proactive role’ in resolving the crisis (Rohingya repatriation),” he told a press briefing at the Foreign Ministry here this afternoon.

He said the Bangladesh premier is visiting China at an invitation of her Chinese counterpart Li Keqiang. She will join the World Economic Forum (WEF) annual meeting and hold bilateral meetings with Chinese President Xi Jingping and Prime Minister Li Keqiang.

During the meetings with top Chinese leaders, the foreign minister said, Dhaka will raise a strong demand so that China creates pressure on Myanmar for taking back its nationals from Bangladesh.

Momen said Dhaka has planned to explain to China that the Rohingya crisis could eventually spread pockets of radicalism throughout the entire region.

“We will tell them (China), if peace and security don’t prevail in the region, the huge Chinese investment in Myanmar as well as in Bangladesh will be threatened,” he said.

Momen said China is sincere to help Bangladesh in tackling the crisis. “China always agrees about repatriation of Rohingyas and advised us to resolve the problem through bilateral discussions with Myanmar,” he added.

The foreign minister said Bangladesh has been engaged bilaterally with Myanmar and “Bangladesh has no dispute with China in this regard (Rohingya crisis)….. China always told us that they agree with us (Bangladesh) that Myanmar should take back their people (Rohingya).”

“There is a change in mindset … the countries which had opposed it (Rohingya crisis) earlier like China and Russia even India are now on our side,” he said.

Terming Sheikh Hasina ‘one of the greatest diplomats’, the foreign minister said “Our Prime Minister is now one of the major statesmen in the world and she developed a good relation with the Chinese President.”

So, Momen said, “We do believe, when our Prime Minister will tell the Chinese President, Beijing will take a proactive action so that Rohingyas go back to their homeland (Myanmar),”

Bangladesh is hosting over 1.1 million forcefully displaced Rohingyas in Cox’s Bazar district and most of them arrived there since August 25, 2017 after a military crackdown by Myanmar, termed as “textbook example of ethnic cleansing” by the UN.

Apart from the Rohingya issue, the foreign minister said, the premier’s visit will help further strengthen bilateral relations as well as trade and investment cooperation between Bangladesh and China.

During the visit, he said, Bangladesh and China will ink eight instruments in different sectors ranging from economic, power and ICT to tourism.

The event titled “Annual Meeting of the New Champions 2019”, also known as WEF Summer Davos, will take place in the Chinese city of Dalian from July 1 to 3.

The flight is scheduled to land at Dalian Zhoushuizi International Airport, Dalian, Liaoning Province, at 12:25 am (local time) on July 2.

After the reception at the airport, a ceremonial motorcade will escort the premier to Shangri-La Hotel, where she will be staying during the visit to Dalian.

On July 2, the prime minister will attend the inaugural ceremony of the WEF Summer Davos at Dalian International Conference Center in the morning.

The theme of the summit is “Leadership 4.0 – Succeeding in a New Era of Globalization”.

Sheikh Hasina will meet Founder and Executive Chairman of World Economic Forum Klaus Schwab at his office and join a panel discussion on “Cooperation in the Pacific Rim” Dalian International Conference Centre in the afternoon.

On July 3, the prime minister will leave Dalian for Beijing at 11 am by a special chartered flight to be provided by the Chinese government.

The flight is scheduled to arrive at Beijing Capital International Airport around 12:15 pm the same day.

After the reception at the airport, the prime minister, in a ceremonial motorcade, will be taken to Diaoyutai State Guest House, where she will be staying during her visit to the Chinese capital.

In the afternoon, the prime minister will join a community reception followed by a dinner at Legendale Hotel, Beijing.

On July 4, Sheikh Hasina will join the welcoming ceremony and place wreaths at the heroes memorial at the Great Hall of the People in the morning.

Later, she will hold bilateral talks with Chinese Premier Li Keqiang and attend the agreement signing ceremony at the Great Hall of the People.

The prime minister will join a banquet to be hosted by the Chinese premier at the Great Hall of the People.

Sheikh Hasina will attend a business roundtable with Chinese business leaders at CCPIT in the afternoon the same day.

On July 5, the prime minister is scheduled to deliver a speech at an event organized by a Chinese think tank named “Pangoal Institution” in the morning.

The CEOs of Chinese companies are expected to call on Sheikh Hasina at her place of residence and will hold a meeting with Chairman of NPC Li Zhangshu.

The prime minister will hold a meeting with Chinese President Xi Jinping at Diaoyutai State Guest House in the afternoon. After the top meeting, a joint statement will be adopted.

She will also join a banquet to be hosted by the Chinese president at the same place.

More than 1,800 leaders from government, business, civil society, academia and the arts will come together in Dalian next week for the World Economic Forum’s Annual Meeting of the New Champions 2019.