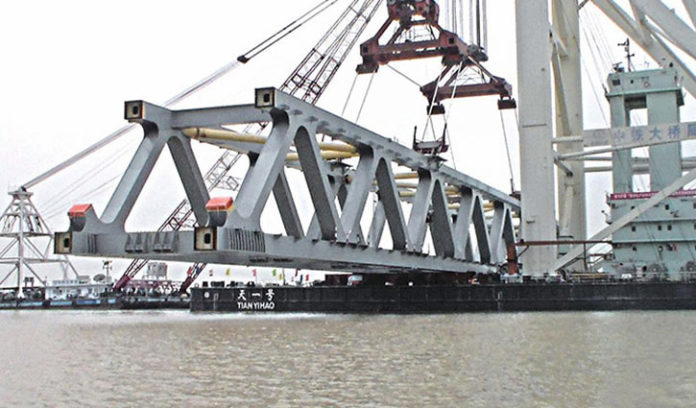 The 14th span of the 6.15-kilometre long Padma Bridge was installed on the 15th and the 16th pillars at Mawa point making 2,100 meters of the main structure visible.

“The 150-meter long 14th span has been installed on the 15th and the 16th pillars at Mawa point at 4pm today,” an engineer of Padma Multipurpose Bridge told BSS here.

He said installation of the span was scheduled for June 27 and June 28 but it was not possible due to unfavorable weather condition and silt depositing at the point.

A total of 41 spans will be installed on 42 concrete pillars to complete the bridge, he added.

According to the project details, the construction of the 6.15-kilometre long Padma Bridge is going on in full swing with the target to complete it as soon as possible.

According to experts, the national economy is expected to witness 1.2 percent GDP growth rate, while 0.84 percent poverty will be reduced every year after completion of the construction of the bridge at a cost of Taka 30,193.39 crore.

The first span of the Padma Bridge was installed on September 30, 2017. The second span was installed four months later on January 28, 2018 while the third one was placed on March 11, after one and a half months.