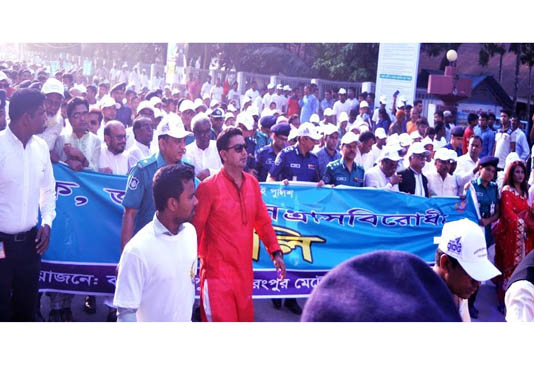 “Drug, terrorism and militancy have been identified as barriers to achieve SDGs and police is committed to ensure sustainable sincerity involving people adopting community policing concept,” the IGP said at a post-procession rally here in the evening.

The IGP inaugurated the procession organised by Rangpur City Community Policing Committee by releasing balloons and pigeons before attending the rally against drug, militancy and terrorism and its inauguration of the committee followed by a colourful cultural evening held on Pubic Library ground in the city.

“We have already achieved success in controlling militancy and terrorism involving common people who played the most important role side by side with positive of the country’s mass media,” he said.

In Bangladesh, there is only one police member for every 1,000 citizens on an average. This strength of police is not adequately enough to curb all sorts of crimes in the society.

“Members of community policing committees and police should work shoulder to shoulder involving people for controlling drug, militancy and terrorism easily to ensure sustainable security and attain the SDGs for better future of next generations,” he said.

The IGP asked parents to properly bring up children so that they did not choose drug addicts as friends and militant groups could not misguide them through misinterpretation of Islam, the religion of peace, misusing internet facilities.

H called upon members of community policing committees and common people to continue extending assistance to police to free their respective localities from drug, terrorism and militancy for ensuring sustainable security for the whole country.