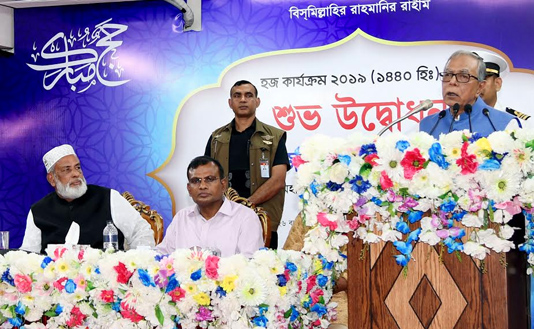 “Please keep in mind, the hajj pilgrims don’t go to Saudi Arabia availing of any kindness or pity, rather you (HAAB) do benefit from them, don’t cheat them in the name of hajj business,” he said and termed the issue a very sensational one.

Referring to various anomalies and irregularities in dealing the hajj affairs, the President issued a stern warning against negligence, irregularities and corruption in Hajj management.

“The government won’t hesitate to go tough against any individual, agency or institution if found involved in such ill-practices,” he warned.

The President asked the HAAB representatives to ensure all necessary facilities for the hajj pilgrims in Makkah and Medina while performing hajj.

The head of the state urged the hajj pilgrims to make dowa for the development and progress of the country and the people while offering prayers at the holy mosques.

“You are going to the holy places. You will offer prayers seeking the eternal peace for the Father of the Nation Bangabandhu Sheikh Mujibur Rahman and martyrs who sacrificed their lives for the country’s independence and for the emancipation and welfare of world humanity,” he added.

Calling the hajj pilgrims the “ambassadors of Bangladesh”, the President urged the hajj aspirants to uphold the image of the country in all spheres.

“Please keep in mind that none should get hurt by your behaviour and speech,” he advised, wishing everyone’s safe return after performing the hajj. Special prayers were offered for safe journey of the pilgrims and acceptance of the holy Hajj by the almighty Allah.

Later, the President exchanged pleasantries with the pilgrims. Total of 126,923 pilgrims from Bangladesh, including 6,923 under the supervision of the government, are expected to perform Hajj this year.

The flights of Biman Bangladesh Airlines and Saudi Airlines will carry all pilgrims to Saudi Arabia to perform hajj. Flight operation will begin on July 4.