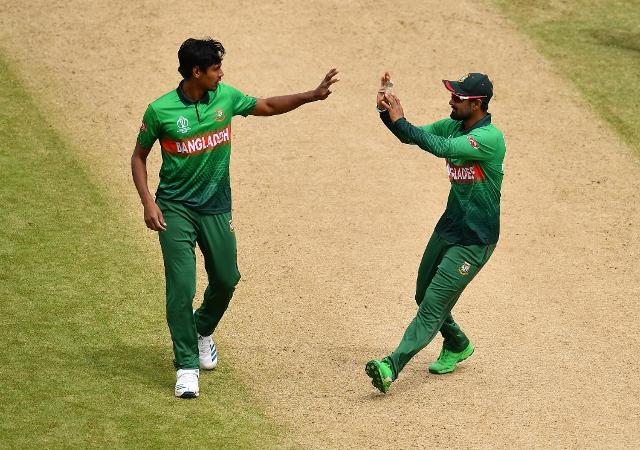 Bangladesh fast bowler Mustafizur Rahman claimed 5-59 to restrict India to 314-9 in the side’s eighth game of the World Cup at Edgbaston in Birmingham on Tuesday.

This is a must-win game for the Tigers to stay alive in the semifinal race and they will fancy the chance, emboldening by the fact that they have twice overhauled target of 320 plus in the World Cup history. They latest came against West Indies a couple of weeks ago when they gunned down 321-run target with utmost ease.

With his fourth five-for in his 53-match career and incredible third against India, Mustafizur was instrumental to slow down the sub-continent rivals, who looked destined to score past 350 plus after their openers put up 180 in just 29.2 overs.

Displaying an intriguing show of cutter and slower, his stock weapons, Mustafizur Rahman put a brake on India’s power-packed batting towards at the end, letting them score just 63 runs in the last 10 overs.

But Bangladesh effectively could restrict India below 300 had Tamim Iqbal not shelled a regulation catch of Rohit Sharma at deep square leg when he was on 9.

Rohit made Bangladesh pay the price heavily for dropping him, hitting his fourth century in the tournament. By the time when Soumya Sarkar removed him, he struck a tremendous 104 off 92 with seven fours and five sixes.

His dismissal brought an end to the 180-run partnership. His fellow opener KL Rahul chipped-in-with 92 ball-77, hitting six fours and one six. Rishab Pant made 48 off 41 while MS Dhoni scored 35 off 33.

Bangladesh like other teams knew the template to how to strangle India. They knew once they would take out India’s top three batsmen, they would crumble under pressure.

And the Tiger got that golden opportunity in just fourth over but they squandered the chance to allow them do the carnage.

However, Mustafizur brought back Bangladesh in contention with double-wicket maiden in the 39th over, taking out Virat Kohli (26) and Hardik Pandya (0). That effectively ended India’s hope to get past 350 plus total.

Mustafizur then lived up to his reputation as good death over bowler to stifle India’s batsmen. It was his first five-for against India after his landmark debut series against the same team when he won Bangladesh consecutive two matches with two straight five-for and six-for.

But as the pitch showed definite sign of wear and tear, it would be an uphill task to achieve for the Tigers. Shakib Al Hasan, Rubel Hossain and Soumya Sarkar picked up one wicket apiece.