Bangladesh to take part in Inter-Parliamentary Cricket WC in London 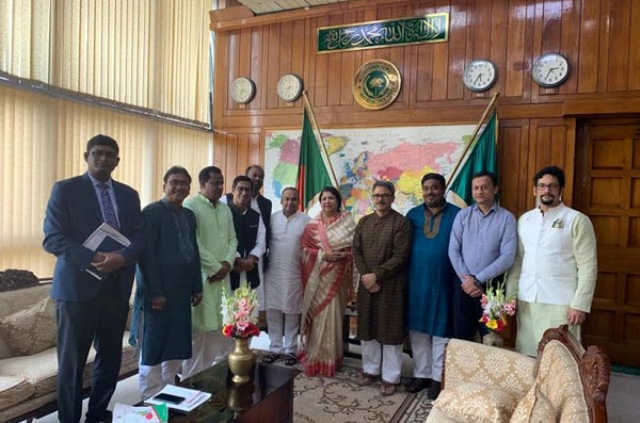 News Desk : The first edition of Inter-Parliamentary Cricket World Cup is set to kick off on July 9 as politicians from different countries will lock horns on a different turf in London amid the drumbeat of the ongoing ICC Cricket World Cup.

MPs from eight cricket-playing nations – Bangladesh, India, Pakistan, Sri Lanka, Afghanistan, Australia, South Africa and hosts England – will compete in the tournament, a brainchild of Chris Heaton-Harris, the Conservative MP for Daventry who has organised the tournament in conjunction with the England and Wales Cricket Board (ECB).

For three months now, the Bangladesh Legislative Team has been hitting the nets to practice at the centre wickets of the Sher-e-Bangla National Cricket Stadium (SBNCS) at Mirpur, Dhaka, at late evenings and early mornings. Before flying to Londom, Nurunnabi Chowdhury Shawon, Naimur Rahman Durjoy, Nixon Chowdhury, Fahmi Gulandaz Babel, Razee Mohammad Fakhrul, Nahim Razzaq, Sheikh Tonmoy and company honed their batting, bowling and fielding skills and techniques as much as possible.

They have been confident enough to even post a training video on YouTube. The Bangladeshi legislators have meanwhile played practice matches to select the best possible team.

The Bangladesh Cricket Board (BCB) has appointed Dipu Roy Chowdhury and Jafrul Ahsan to look after the logistical support for the team.

Nazmul Hasan Papon, BCB president and another MP of the ruling party, supervises the team in the World Cup.

The participating teams will be split into two groups for the matches which will be played at various venues in London.

The teams will face off each other in four six-a-side matches on July 9 before the group stage matches begin on July 10.

Two teams from each group will move into the semifinal. In the group stage, the matches will be 15 overs a side and the semi-finals and final will be 20 overs a side.

It is predicted that Pakistan Prime Minister and World Cup winning captain, Imran Khan, could leap into action to bowl at Labour leader Jeremy Corbyn or any newly elected MP, alongside Indian cricketing legend Sachin Tendulkar, who served as an MP during 2012-18.

The tournament will help strengthen ties with the UK and the participating cricketing nations by building diplomacy through sport.

During the tournament, MPs of participating countries are invited to attend receptions to be hosted respectively by the Speaker of House of Commons John Barcow at his Parliament Residence on Monday, Foreign Secretary Jeremy Hunt at Durbar Court at the British Foreign office on July 9 and Prime Minister Thersea May at the Rose Garden in 10 Downing Street on July 14.

The tournament organisers have partnered with Chance to Shine, the official charity of the England and Wales Cricket Board, and the participating legislators will be involved in several charitable events. And then, they would comfortably settle down together to watch the real World Cup final at Lord’s.