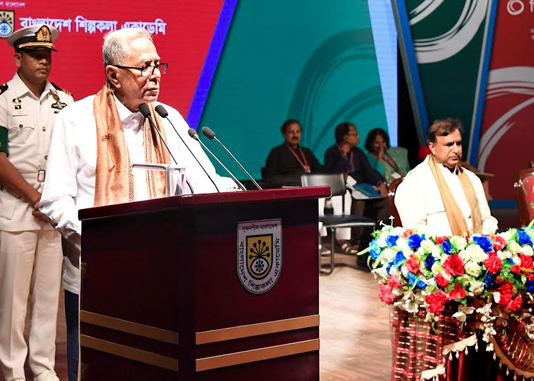 President M Abdul Hamid today asked all to come forward to nourish and develop healthy culture to eliminate militancy and fanaticism from society.

“Promote healthy culture . . . You have to use culture as a weapon of eradicating filthiness from society,” he told a function at the National Theatre Hall of Bangladesh Shilpakala Academy (BSA) here on the occasion of “Shilpakala Padak-2018” distribution.

The head of the state said, “Due to satellite culture, foreign culture is now encroaching on the local culture. We have to accept all good things that go with our culture and heritage. ”

President Hamid advised all to avoid all unnecessary, anti-country and bad things facing the cultural hegemony.

Noting that the culture is the mirror of life, he said cultural personalities never can do any harm to society.

President Hamid urged guardians to inspire their children to engage in different cultural activities along with their studies.

Their engagement with cultural and literary works helps play a significant role in developing human values, patriotism, the spirit of liberation war and non-communalism, the President observed.

Lauding different cultural works on the Language Movement, the War of Liberation and Bangabandhu, he said the Shilpakala Academy has taken a very good decision to introduce the award. “I think this initiative will play a vital role to build a humane society,” he added.

The President handed over the prestigious “Shilpakala Padak 2018” in seven categories to seven cultural personalities for their outstanding contributions in respective fields.

The President enjoyed a cultural function after the award giving ceremony there.