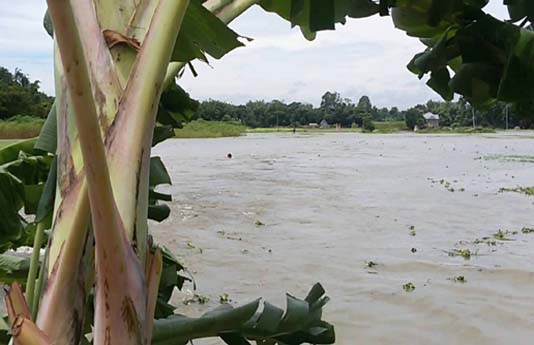 Flood situation is improving in most parts of the country as water levels in major rivers are in falling trend, according to the Flood Forecasting and Warning Centre (FFWC).

An official of FFWC today told BSS that improving trend of flood may continue during the next few days as there is possibility of less rainfall in the country this week.

Sardar Uday Raihan, sub-divisional engineer of FFWC, said, Northern, northeastern and hilly regions have been badly affected by floodwater as the major rivers are overflowing due to heavy rainfall and onrush of water from upstream. However, floodwater started receding from affected areas, he said.

Flood situation in Gaibandha, Jamalpur, Bogra, Tangail, Serajganj, Manikganj, Rajbari, Faridpur and Munshiganj districts may improve in next 24 hours, according to a bulletin of FFWC.

All the major rivers of the country are in falling trend except the Surma-Kushiyara and the rivers around the Dhaka city, it said, adding, Teesta River at Dalia point and Dharala River at Kurigram point may rise abruptly and exceed danger level in the next 24 hours.

In Rangpur, the government has a target for distributing relief materials among over 20.52-lakh flood-hit people to mitigate their sufferings in seven flood-affected northern districts in the Brahmaputra basin.

The seven district administrations still have reserve of 1,955 tonnes of rice, Taka 24 lakh and 1,000 packets of dry foods for distribution among flood-affected people of these districts where flood situation continues improving in recent days.

In Sherpur, flood situation in Sherpur district has improved slightly in the past 24 hours, Water Development Board sources said.

In Jamalpur, over all flood situation in the district has improved as water level of the Jamuna River is decreasing.

On the other hand water level in the Old Brahmaputra has decreased by 10 cm and was flowing 5 cm over the red mark at Jamalpur ferry Ghat point till 12 noon today, Water Development Board sources said.

An official of District Relief and Rehabilitation office said, the flood affected about 12.85 lakh people in the district, damaging 7205 houses completely and 45580 houses partially.

The Department of Agricultural Extension Office sources said standing crops on 25845 hectares of land including Aush paddy on 5030 hectares, T-Aman seeds bed on 2860 hectares, jute on 12912 hectares, vegetable on 4631 hectares, Chilli on 190 hectares, Banana grove 107 hectares, sugarcane on 80 hectares and summer maize on 35 hectares went under flood water in the district.