Flood prevails in most areas as major rivers decreasing closely 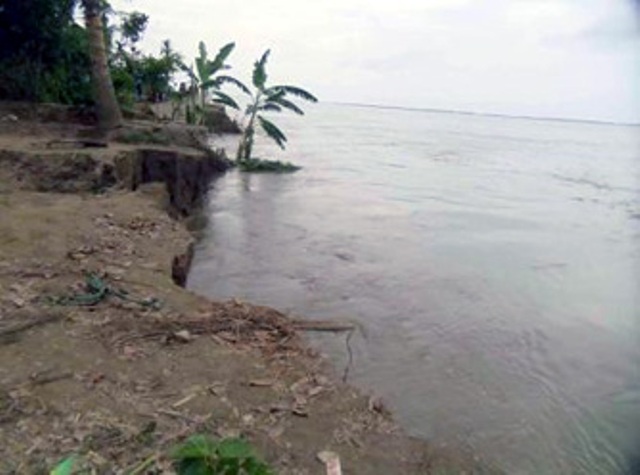 Low-lying and char areas in northern, northeastern and middle parts of the country have been badly affected by flood as water levels of major rivers are decreasing slowly, an official of Flood Forecasting and Warning Centre (FFWC) said today.

Md Arrifuzzaman Bhuiyan, executive engineer of FFWC, told BSS that, “Flood situation in low-lying and char areas in the country have remained unchanged as floodwater is receding very slowly creating untold suffering of the people.”

As Bangladesh is a riverine country, a good number of people are living across the riverbank and char areas, he said adding, these people are affected by flood almost every year.

All the major rivers are in falling trend except the Jamuna, a bulletin of FFWC said adding there is a chance of heavy rainfall in the South-Eastern and South-middle parts of Bangladesh in next 24 hours.

All the major rivers may fall except the Kushiyara and the rivers of southern parts of the country in next 24 hours, the FFWC said.

North and north-eastern region in the country may face flood, if the country witnesses heavy rainfall, the flood outlook added.

According to the flood forecast report water levels of all major rivers are decreasing and some regions experiencing severe flood as major rivers at many points are flowing above danger level.

Northern, northeastern and south-eastern regions of the country were badly affected by flood since second week to third week due to heavy rainfall in four river basins and vast areas in upstream region of India.

A total of 26 districts have so far been hit by flood this year, the bulletin said adding flood situation significantly may improve at end of this month.

In Gaibandha, water level of the Brahmaputra river and the Ghagot river rose further deteriorating the overall flood situation in the district and creating untold sufferings to the flood victims.

As many as 98,000 people have taken shelter at 190 schools, colleges and madrashas which are being used as flood shelter centers, he also said.

Deputy commissioner (DC) Abdul Matin told the BSS that 1380 tonnes of rice, TK 21 lakh and 6000 cartoons of dry food received from Relief and Disaster Management Ministry had been distributed to the flood hit people of the district so far.

In Kurigram, overall flood situation in the district has remained unchanged despite Jamuna and Dharalo are in falling trend.

Water development Board sources said flood protection embankments in the Sadar Upazila are at risk for huge pressure of floodwater. Several thousands of people in the upazila have taken shelter on embankments and high lands.

Rail communication on Kurigram-Chilmari route has been snapped as floodwater inundated rail lines, an official of local administration said.

In Tangail, floodwater inundated 499 villages as water levels at major rivers have swelled up.

District administration sources said over five lakh people have been marooned by flood water. Monsoon flood forced to shut down 274 educational institutions in the district.

A total of 1,380 families have become homeless due to riverbank erosion in the district, officials said adding standing crops on the vast tract of land went under floodwater.

Relief goods are being distributed among the flood victims in Tangail district, they added.