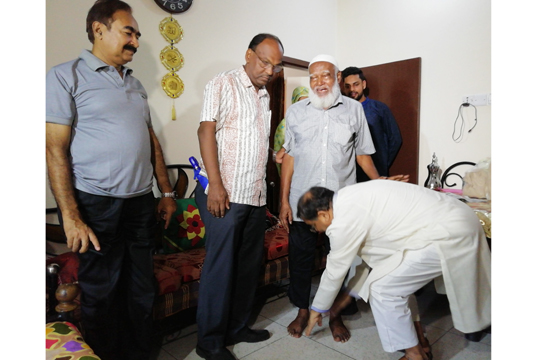 Nostalgia drove the information minister to go back to his golden school time and meet his quest for tracing back his favourite school teacher, who had significantly contributed to the making of a Hasan Mahmud.

It was an emotional outburst characterized by love, respect, affection and dutifulness when Hasan Mahmud made a surprise visit to the Biyazid residence of his favorite teacher Mohammad Ishaque, former headmaster of Muslim High School, Chattogram.

Affectionate Mohammad Ishaque could not resist the temptation of embracing his favourite student Hasan and fondled him creating a scenario of happiness and animation.

Showing his utmost respect and love for his school teacher Hasan Mahmud recalled his fond memories of school life and the pious ways of Mohammad Ishaque in making the students worthy citizens of the country. The information minister enquired about the health condition of his favourite headmaster.

Hasan Mahmud passed Secondary School Certificate (SSC) examination from the Government Muslim High School in 1978. On the other hand, Mohammad Ishaque retired as the headmaster of the school in 1994.

Dr Hasan Mahmud was accompanied by his batchmates — Jamal Naser Chowdhury and SM Elias Dulal– during the visit.