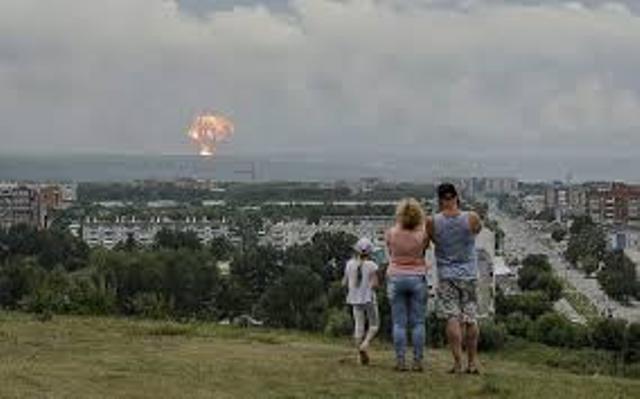 Russia on Monday said radioactive isotopes were released in a recent accident at an Arctic missile test site
that caused widespread alarm as authorities kept details under wraps. The August 8 blast killed five scientists and caused a spike in radiation levels but for several days Russia did not admit nuclear materials were involved.

The accident released swiftly decaying radioactive isotopes of strontium, barium and lanthanum, media reported, citing tests by the Rosgidromet national weather and environmental monitoring agency. Alexander Uvarov, editor of the independent AtomInfo.ru news site, said the isotopes did not pose a threat to the population.

These isotopes are products of nuclear fission of uranium, he told RIA Novosti news agency. But Greenpeace Russia said the weather agency’s figures contradicted earlier statements from Rosatom, the national nuclear agency, adding there could be a health risk.

It called on authorities to release full data on radioactive contamination in the area. Sensors in the nearby city of Severodvinsk detected radioactive elements with a half-life ranging from a few hours to up to 12.8 days and break down into radioactive inert gases, Rosgidromet said. “These inert radioactive gases were the cause of a brief increase” in radiation levels, it said.

The monitor said earlier that its sensors in Severodvinsk measured radiation levels that were up to 16 times higher than background levels after the explosion, returning to normal after two-and-a-half hours.

Russia’s Rosatom nuclear agency has said that its specialists killed in the accident were developing “new weapons” and providing support for a missile with an “isotope power source.” Norway’s nuclear safety authority said it detected tiny amounts of radioactive iodine in a region bordering Russia after the blast while it could not determine if this was related to the accident.

The Russian authorities have confirmed that a doctor involved in treating the injured had a trace of radioactive isotope caesium-137 detected in his muscle tissue, while denying this was related to the accident. The Kremlin on Monday declined to comment on the report of radioactive isotopes. Spokesman Dmitry Peskov said: “This should be done by experts.”