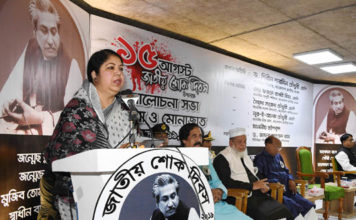 Jatiya Sangsad Speaker Dr Shirin Sharmin Chaudhury today urged all to pass on the instances of ideology, patriotism and bravery of the Father of the Nation Bangabandhu Sheikh Mujibur Rahman from generation to generation. “The undisputed leader of the Bengalis Bangabandhu felt that the discrimination and exploitation of people should end and fought . . . Pass his ideology, patriotism and bravery to the new generation,” the speaker told a discussion in the Parliament Complex here.

Dr Chaudhury also asked officials and employees of the parliament secretariat to know the actual history of the birth of Independent Bangladesh. Bangladesh Jatiya Sangsad Secretariat organized the discussion on the occasion of the National Mourning Day and the 44th martyrdom anniversary of Father of the Nation Bangabandhu Sheikh Mujibur Rahman where the Speaker was the chief guest.

Recalling the contribution of the Father of the Nation to achieve an Independent Bangladesh with due respect, she said Bangabandhu’s philosophy was only to attain political and economic emancipation of people. Referring to the present government’s development activities, Shirin Sharmin said under the charismatic leadership of Prime Minister Sheikh Hasina, daughter of the Father of the Nation, country had reached a new height.

“Bangladesh is now a role model of development in economic and social indices,” Dr Chaudhury added. A documentary on the life and works of Bangabandhu was also screened after the discussion.

Later, special prayers was offered seeking eternal peace of the departed souls of Bangabandhu and other deceased family members who were assassinated on the fateful night of August, 1975 and other martyrs who sacrificed their
most valuable lives in different democratic movements, including the War of Liberation and the Language Movement.