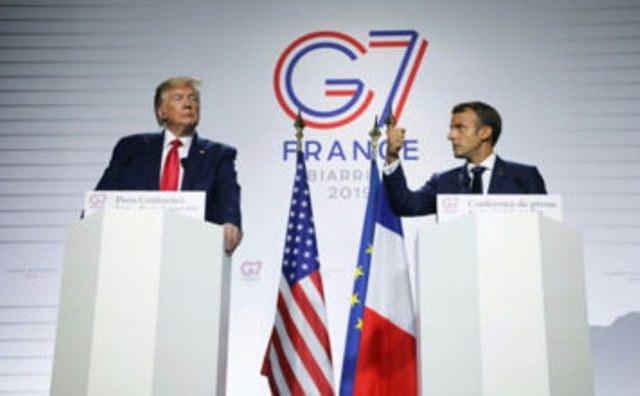 French President Emmanuel Macron said Monday G7 members had reached an agreement on the taxation of tech giants, a long-standing subject of friction between France and the US which has threatened to retaliate with tariffs on French wines.

Speaking alongside US President Donald Trump at a G7 summit in southwest France, Macron admitted that there had been “a lot of nervousness” about France’s new tax on tech behemoths such as Google and Facebook.

But negotiations between France and the United States had produced “what I think is a very good deal,” he said.

Macron explained that France would scrap its own digital tax once a new international levy being discussed among 134 OECD countries is in place. France hopes it will be ready in 2020.

Asked whether he would now rescind his threat to slap punitive retaliatory tariffs on French wines, Trump, who had described the French tax as “very unfair”, was non-committal.

His wife Melania “loves the French wine”, he joked.

The US leader, who was elected on a protectionist platform, had earlier announced that Paris and Washington were “close” to a deal.

“They want to make a deal and we’ll see if we can make a deal,” Trump said. – Reimburse excess taxes –

The French parliament passed its new levy in July amid frustration at the slow pace of negotiations on a new global accord to ensure tech multinationals pay a larger share of taxes on their operations.

Under EU law, American tax giants can declare their profits from across the bloc in a single jurisdiction — in most cases low-tax jurisdictions such as Ireland or the Netherlands.

The French tax, which targets local sales rather than profits, has drawn accusations of discrimination from the so-called GAFA companies (Google, Apple, Facebook and Amazon).

Under the agreement struck in Biarritz, French tax authorities will look at how much companies paid in French “GAFA” taxes and how much they would have paid under the yet-to-be-decided international formula, French Economy Minister Bruno Le Maire told AFP.

“Everything that is paid in excess compared to the international solution will be credited to the company,” he added.

Britain has also announced plans for a tax on tech giants, accused of exploiting fiscal rules to sharply cut their tax bills despite soaring profits.

“Frankly, we must do something to tax fairly and properly the online businesses that have such colossal sales in our country,” British Prime Minister Boris Johnson said ahead of talks with Trump in Biarritz on Saturday.