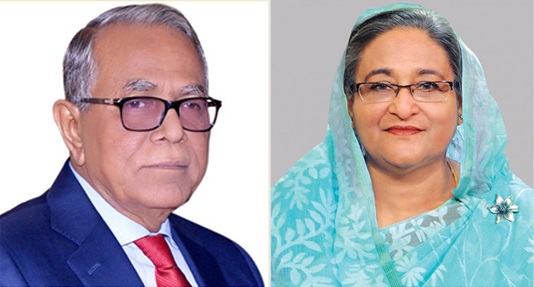 They will be given the award at a function in the capital tomorrow.

In a message on the eve of this occasion, President Abdul Hamid said exports are the driving force of the economic development and tireless efforts and toils of exporters, along with the government’s efforts, are taking the country ahead.

The role of the export sector in Bangladesh’s GDP (Gross Domestic Product) has been increasing day by day, he said, adding that the country is now recognized as a developing country.

President Abdul Hamid said the government is implementing different programmes to expand the country’s export basket. Steps need to be taken to improve the quality of export products, create new markets along with consolidating existing market and include new products in the export list for sustaining in the overseas trade, he added.

He said honouring the exporters through awarding the trophy will play a positive role in facing the global challenges, expand sustainable industrialization and create new entrepreneurs.

In another message, Prime Minister Sheikh Hasina said the export sector is playing a vital role in the economic development of Bangladesh.

The export sector is playing an important role to increase investment and to create employment opportunity, she said, adding that the Awami League government is working relentlessly to strength the country’s economy.

“The government has taken up a special plan to take the country export sector to a new height by infusing dynamism into the activities of financial organization, creating jobs and boosting investment,” she said.

Describing the present government a business-friendly one, Sheikh Hasina said the government is working with the business community closely to develop the export sector gradually and to expand the overseas trade.

Work on establishing 100 special economic zones across the country is progressing fast and the country’s economy will get a new boost when the zones will be completed, she added.

“I hope that the step to distribute the National Export Trophy would play special role in expanding the country exports,” she added.